Synod on the Family 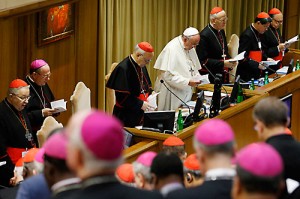 The Church’s merciful response to the debate on family issues is evident in the events surrounding the Catholic Synod on the Family, held in October 2015.

Family related issues including marriage, remarriage, homosexuality, abortion are in the line of fire for debate and scrutiny. A recent survey of American Catholics showed that even among the faithful, opinions on these topics vary.

In organizing the 2014 and 2015 Synods, Pope Francis demonstrated his understanding of the desperate need for conversations around the family. From the 4th to 25th October 2015, the 14th Ordinary General Assembly of the Synod of Bishops was held in Rome, with the theme being “The Vocation and Mission of the Family in the Church and in the Contemporary World.”

Pope Francis called a small Synod in 2014 preceding this year’s event, with the focus also on families. This was to gain a reliable and accurate understanding of the status of family issues, before the full discussion in 2015.

This year in October, hundreds of Bishops and Cardinals from many rites and movements around the globe met in Rome to participate in the conversation as Synod Fathers. Australia was represented by Archbishop Mark Coleridge of Brisbane and Bishop Eugene Hurley from Darwin. Their thoughts and experiences can be viewed on the ACBC Website.

Throughout the event, many of the Synod Fathers were given a chance to speak on a particular topic related to the theme. This resulted in a wide variety of thought and experience leading the discussion to the heart of many issues.

The assembly brought forward a variety of topics around marriage. Pope Francis stated early on that the Church’s doctrine on marriage was not about to change, however he challenged the way Catholics approach the issues, pushing for mercy and compassion. The Synod Fathers discussed divorce and remarriage, pastoral care for couples before and after they marry, and care for couples that live together before marriage, among other similar issues.

“Repeating doctrinal formulations alone will not bring the gospel and the good news of the family into an antagonistic society. We have to find a language which helps our young people to appreciate the newness and the challenge of the gospel.”

Other topics covered include domestic violence, women’s role in the Church, and the Family needing more pastoral support from the Church.

The purpose of a Synod is to inform the Pope about the Church and her people, through the Bishops. It is not the place where definitive teaching changes, but the Pope hears from representatives, and learns about the Catholic people to inform later decisions.

Archbishop Coleridge said on the matter of outcome,

“This is an essentially practical synod. And that’s what I think it means to call it pastoral. If all that we come up with is either nothing, or waffle, I don’t think the synod will have succeeded.”

We pray for the discussion that took place at the 2015 Synod of Bishops, and the decisions that are to be made concerning matters of the family.