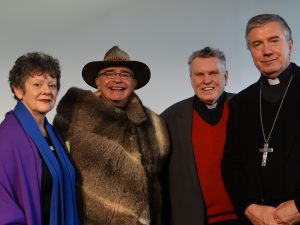 Archbishop Christopher Prowse with (from left) Vanessa Crimmins, chair of the Presbytery of the Uniting Church, Shane Mortimer from the Ngambri nation and Dean Phillip Saunders, Dean of the Anglican Cathedral, St Saviours, Goulburn

More than 100 people attended “For Such a Time as This – Forum Reflecting on Family and Domestic Violence” at the Australian Centre for Christianity and Culture.

The forum was hosted by the Archdiocesan Commission for Women, and the Anglican and Uniting Churches as an ecumenical response to the scourge of domestic violence.

The forum was opened by representatives from the sponsoring churches including Archbishop Christopher Prowse, Dean Phillip Saunders of the Anglican Diocese of Canberra and Goulburn, and Vanessa Crimmins of the Canberra Region Presbytery of the Uniting Church.

Vanessa Crimmins, quoting from her foreword to the book For Such a Time as This, reminded those present of the power of prayer in such times:

“Family violence is a dark and bloody battlefield and violence breeds further violence. We can unite in prayer to stand in the gap for those whose spirit has been wounded and to break the cycle of generational violence. We can intercede for healing and the restoration of shattered lives.”

Ms Quigley showed the forum a moving video from Our Watch, “Let’s change the story: Violence against women in Australia”, which can be viewed at www.ourwatch.org.au.

These groups provided insight into services provided to support victims of domestic violence. They all reiterated the importance of a community response.

The seminar also included the launch of For Such a Time as This: reflections on healing and hope, a book of confronting stories about domestic violence, questions for discussion and prayer prompts, published by the Canberra Region Presbytery of the Uniting Church.

Later, there was time for reflection, personal stories from survivors of domestic violence, and prayer and liturgy led by Susanne Pain and Margaret Ryan.

The day’s final blessing included an exhortation for those present to be blessed “with insight to recognise violence in all its forms, and the courage to name it, speaking out for justice… with compassion for the vulnerable, and grace to stand with them”.