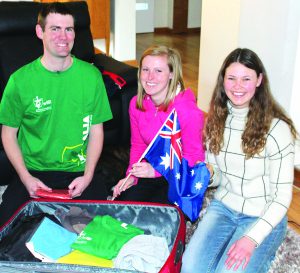 Visiting the birthplace of St John Paul II will be one of the biggest thrills for Canberra pilgrims to World Youth Day, Grace Hyland and Samantha Bartley.

They are among a group of 21 teachers, young adults and others including Archbishop Christopher Prowse – part of an Australian contingent of 2500 – who will travel to Krakow, Poland, this month to take part in the festival of faith for young people.

While reading a biography of Pope John Paul II, Grace said she had a strong sense “he was praying for me. I now want to see Jesus through his life and to go to his birthplace.

“John Paul II was madly in love with Jesus and the Eucharist. Wherever he went he’d always find a chapel and have time to adore Jesus. I hope to imitate him.

Grace, the oldest of five children, was 13 when WYD was held in Sydney in 2008 and although she was there she spent much of the time looking after her siblings.

Samantha, who is in her second year of teaching at Holy Spirit School, Nicholls, said she was wanting to deepen her faith and build her relationship with Christ. “I want to be a better role model in Catholic education to benefit the kids, to show them how to live the gospel message.”

In addition to seeing where the former Pope and now saint was born and grew up, she is also looking forward with a tinge of sadness to visiting the remains of the former Nazi concentration camp at Auschwitz.

Coordinator of Youth and Young Adults for the Archdiocese Stuart West also looks forward to the Auschwitz visit as “terrifying but exciting with the potential to be overwhelming”.

Stuart, who attended WYD in Sydney, is on his first international WYD pilgrimage and will help to take care of the young pilgrims.

“It’s a very exciting opportunity to work with a group of young people on a journey of faith,” he said. Personally, he is looking forward to rekindling memories of Marian devotion in his childhood when the pilgrimage visits a Marian community in Poland.

He expects the experience of sharing WYD week itself with 2-1/2 million others, including catechesis sessions, the Way of the Cross and the huge sleepout leading up to the final open-air Mass celebrated by Pope Francis, will be “incredible”.

The experiences of the young pilgrims will be shared with the Archdiocese via two-to-three-minute daily video blogs on the Archdiocese’s youth and the Catholic Education websites.

Stuart is buoyed by a memory from 2008 in Sydney when a huge crowd of pilgrims on their way home from a WYD music concert crammed on to a long escalator at Sydney’s Central Station. “The security guards and police all came out to see who was singing, and then they smiled, too. It was so contagious, being around people so happy to celebrate their faith.

“The question is ‘why are we not doing this every day’?”

How to share that joy will be one of the questions Stuart knows he and the other pilgrims will bring back with them when they return.