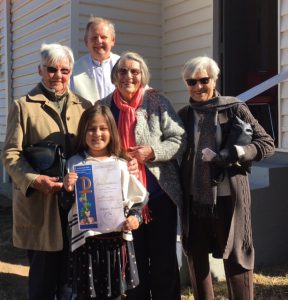 Nestled in the upper reaches of the Shoalhaven River, surrounded by picturesque mountains and a fertile valley, the isolated, small, but active, faith community of St Brigid’s Krawarree, celebrated first Holy Communion with Bally Gunderson, a Year Three student from St Bede’s, Braidwood.

After Fr Peter Day celebrated Mass, past resident of the Krawarree district Netta Behringer (nee Bradley)from Moruya, recalled her own first Holy Communion in the church 77 years ago.

All recalled the photo on the steps outside the church as well as the party-like breakfast that was enjoyed after the ladies of the then congregation had cooked over an open fire in the “Breakfast Room” at the rear of the church.

Similar to years gone by the congregation now enjoys a lunch at the Gundillion Hall, every fifth Sunday of the month’

In true country style the home cooking is scrumptious and in plentiful supply while the desserts are delicious.

Fr Day counted 17 different desserts to choose from, but it was the pavlova that caught his eye!