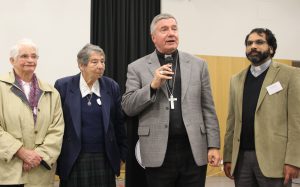 The historic church that St Mary MacKillop visited on two occasions and in which her Sisters attended Mass on Sundays and used as classrooms during the week has been restored and transformed into a museum hall, to recount the life and work of the saint and her sisters.

Mary taught and inspected St Joseph’s students in the hall at Eden on the far South Coast of NSW during her stays in 1899 and 1901.

At a South Coast regional assembly held in St Patrick’s, Bega, Archbishop Christopher Prowse announced the museum as an official pilgrim centre of the diocese with a vision for it to become a national pilgrim centre.

A special Mass will be celebrated in Our Lady Star of the Sea Church, Eden, at 9.30am on Monday, 8 August, to mark the feast day of St Mary MacKillop.

The day is of special significance for the local Catholic community due to the connection it has with the MacKillop family.

When Mary’s mother, Flora, was drowned in the wreck of the steamer, the Ly-ee-Moon on 30 May, 1886, her body was taken to Eden and cared for by the women of Eden. Her body, largely unmarked despite the turbulent waters of Greencape at the northern end of Disaster Bay, was lovingly laid out in a room at the Pier Hotel.

The only item still on her body was a scapular, identifying her as a Catholic. Mary’s cousin, John, came to Eden to identify the body which was taken to Sydney for burial. Seventy one of the 86 passengers and crew on the steamer died in the disaster.

Mary was appreciative of the care and love shown to her mother by the Eden people and decided to send sisters to establish a school in Eden.

Three sisters arrived by steamer on 10 August, 1891, to open the school and convent. It was a daunting task for Sr Joseph Mary, Sr Mary de Sales and Sr Mary Beatrice. The school was in the church built in the 1860s. There was a composite class at each end of the building. A convent was built next to the church and was made large enough to cater for a small number of boarders who came from outlying properties.

Mother Mary made two visits to the school to inspect the students and to conference the Sisters. The first was an eight-day visit in March/April, 1899 and the second was in August 1901.

The Sisters educated the children of Eden and the Pambula Parish. More students started to come from Pambula and Merimbula as roads and transport improved.

The Eden school closed in 2013. The primary section was incorporated into Lumen Christi College at Pambula Beach to give Catholic education a K to 12 campus.

A new school across the road from the church was opened in 1966. The church remained in use until a new one was built in 1992 further down towards the ocean.

The old one was in a state of disrepair and was too small, especially in the summer holiday season. Its main use was to store goods for the St Vincent de Paul Society.

It was decided to restore the building and rename it Mary MacKillop Hall. A committee under the guidance of the parish priest and led by Mr Phil McGrath, carried out the work with input from the local community who donated goods and money.

The hall is open virtually every day of the year and is visited each year by hundreds of people from all over Australia and from overseas.