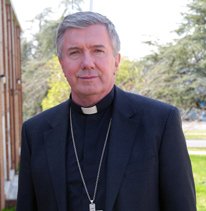 Catholics have been called many different names over the centuries, some positive and some negative. Today is no different. But I have never heard intelligent conversation call us a sect or a cult.

This is pleasing. Jesus describes us as “the light of the world” (Matt.5/14), and “the salt of the earth” (Matt.5/13). We are the sent OUT people, not the sent IN people of God. Our missionary outreach ought to find us especially in the “peripheries”, as Pope Francis would phrase it. As the Community of the Holy Spirit, the Church offers hope and practical help to the poor and oppressed. We see this, for example, in our schools, hospitals and social welfare agencies of the Church. Our motivation is unambiguous: we see Jesus in the hungry, the sick and the stranger. As (almost St) Mother Teresa of Calcutta expresses it, we “quench the thirst of Jesus”. We are not a philanthropic agency amongst others in the world. At our best, we are the presence of Christ to the world.

In Australia, along with other religious communities, we have rejoiced in the latitude successive governments have offered religious communities to pursue our liturgical and apostolic aims unencumbered with excessive governmental controls. When we consider some totalitarian governments in the world, we do not take this freedom for granted. Indeed, this freedom of religious expression is enshrined in the Magna Carta and universal documents of Human Rights in the world.

Australia has been a signatory of these codified and international basic freedoms over many years. Strangely, though, these freedoms are paradoxically expressed in Australian law as exemptions, as if we were getting out of something rather than exercising a fundamental freedom. Nonetheless, these freedoms are one aspect of our “commonwealth” that makes us so attractive to migrants and refugees coming to our shores.

However, these assurances of protection of religious freedom seem to be slowly eroding in Australia. We must not let this happen.

For example, my friend and brother bishop, Archbishop Julian Porteous, the Archbishop of Hobart, has experienced recently extraordinary legal challenges following his distribution of the Australian Bishops’ common statement on marriage and family life. He was accused of breaking anti-discrimination laws in Tasmania by simply offering theological background to his Catholic people as guidance on the current issue of amending the Marriage Act of 1961.

Some political parties today have expressed policies to withdraw these “exemptions or exceptions” in the future. Such draconian legislation, if ever passed, would remove churches from employing, for example, people who share their ethos in schools, charities and churches.

There is sometimes the reassurance that such measures would not affect our “religious” activities (internal) – only our charitable agencies to the wider community (external).

How could religious bodies possibly support such a secularisation of our charitable outreaches? Such activities to the poor are just as much part of our faith expressions as our worship in our churches, mosques or synagogues.

Both are intrinsic to religious expression. To construct such a facile divide is a challenge on our basic human rights to religious freedom.

The final results of the Federal election will be made apparent over the next period of time. The government and political parties will move directly to their future agendas.

Let us pray that the agendas of popularist policies will not interfere or “dumb down” these basic human rights of religious freedom. They contribute to making Australia great among the nations of the world.

May Our Lady, Help of Christians, bless our fair nation of Australia.

May God bless you and your families.