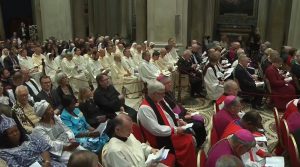 The commissioning Vespers in Rome with Archbishop Christopher Prowse and Anglican Bishop John Parkes in the foreground.

Representing the Anglican and Roman Catholic communities of Australia, we have returned recently from our anniversary pilgrimage in Canterbury (England) and Rome (Italy). It has been 50 years now since Archbishop Michael Ramsay and Pope Paul VI met to begin formally, the worldwide Anglican/Roman Catholic ecumenical dialogue.

Together with 38 Anglican and Catholic Bishops from 19 countries, we reviewed the progress on the pilgrimage to unity so far. The mood has changed from optimism that organic unity was imminent, to a more realistic assessment. Serious obstacles have arisen on matters pertaining to the ordination of women, and human sexuality. Friendships between our communities have continued to mature in the midst of these complex issues.

We listened to the testimonies from around the world of our growing friendships, and practical/pastoral initiatives between our communities. In some parts of the world, both communities have suffered much together in the face of martyrdom, discrimination, and slavery. It has been a kind of “ecumenism of blood” for them. For others, there is the common challenge of responding to secularism, refugees, homelessness and corruption. Wonderful pastoral initiatives were showcased. These are a type of “ecumenism of hope.”

From the Australian point of view, we shared about our “ecumenism of humiliation” in the face of the Royal Commission into Institutional Responses to Child Sexual Abuse, and

our determination to work alongside the victims. We spoke also of the continued practical support offered to each other, especially in our rural communities. We spoke of the mature co-operation in regard to theological education, the work of AustARCC and its production of joint theological documents, and our shared efforts to respond to the many faces of secularism in our home of Australia.

A high point of our time together was the commissioning by Pope Francis and Archbishop Justin Welby of 19 pairs of Anglican/Roman Catholic Bishops from around the world. We have both been commissioned to return to 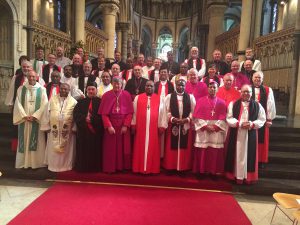 Australia and encourage and re-energise the friendships we have developed in Australia within our communities. We rely on our continued ecumenical friendships, common witness and mission, dialogue and study, and common prayer, to deepen our shared pilgrimage on this ecumenical journey to unity.

Several times over these days the names of revered Australians were mentioned for their past contributions on the world stage to this ecumenical friendship. For example, mentioned were Charles Sherlock, Bishop Michael Putney, Cardinal Edward Idris Cassidy, Bishop Peter Carnley and Fr Peter Cross.

Please share this good news with the very many groups within Australia committed to Anglican and Roman Catholic ecumenical dialogue.

Thank you for all that you have done in the past to foster ecumenical friendship between our communities. Let us find all sorts of practical and pastoral ways to further this friendship together and direct its Gospel energies to assist the poor and oppressed in Australia and beyond.

In the peace of the Lord Jesus who leads us on our own pilgrim way to unity. 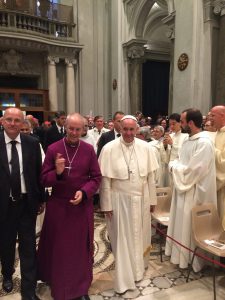