Countdown is on to Youth Festival 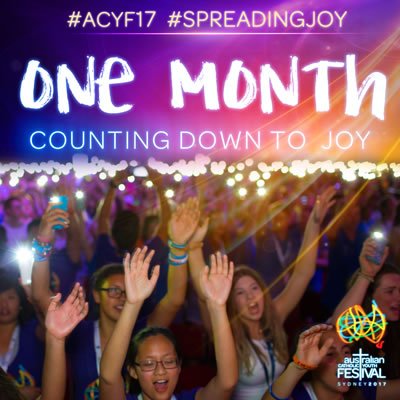 With less than a month to go, Sydney is gearing up to play host to more than 18,000 young Catholics from around the nation for the Australian Catholic Youth Festival.

The 3-day event of concerts, workshops, social events, forums and worship at Sydney’s Olympic Park from 7-9 December boasts a stellar line up of international and home-grown presenters and performers including world renowned Canadian Christian singer and headline act, Matt Maher.

Festivities will conclude with Sydney’s largest Catholic outdoor Mass, since Pope Benedict XVI was here for World Youth Day in 2008, to be celebrated at The Domain on Saturday 9 December 2017.

Catholic Archbishop of Sydney, Most Rev Anthony Fisher OP, has announced the major event, along with the cancellation of all Vigil Masses in the Archdiocese on that date, inviting everyone to participate.