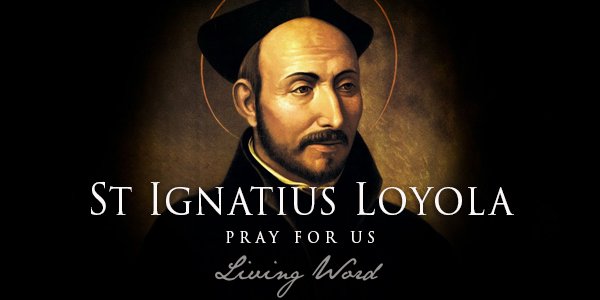 Today we celebrate the feast day of Saint Ignatius Loyola, the great Catholic reformer and spiritual director who, as well as founding the Society of Jesus (aka ‘the Jesuits’), developed the Spiritual Exercises, a series of meditations and prayers that continue to have a profound spiritual impact on those who undertake them, 470 years after they were first published.

Today’s Gospel explanation of the parable of the darnel is a fine one for today’s feast.

Ignatius was filled with zeal for the faith at a time of major upheaval in the Church. He was passionately committed to the idea that he and his Jesus-loving brothers were called by the Lord to be the good seed, sown into the world by the hand of Son of Man himself. Ignatius had no doubt that there are also other forces at work, sowing deception, fear and confusion in the world and attempting to lead souls into darkness.

Ignatius believed we are caught up in a battle of cosmic proportions and there is nothing to gained (and a lot to be lost) by being naïve about that. Jesus certainly didn’t mince His words when He says the end for those who do evil is not a happy one, a ‘blazing furnace, where there will be weeping and grinding of teeth’, whereas ‘the virtuous will shine like the sun in the kingdom of their Father. Listen, anyone who has ears!’

For us in the 21st Century, the task of evangelisation and renewal is as urgent as it was for Saint Ignatius in the 16th Century. The stakes are high. It’s time to embrace our vocation to be the Lord’s good seed in the world.

Want to stay connected to Christ and his Gospel every day?
Please fill in the form and submit to subscribe. Thanks.