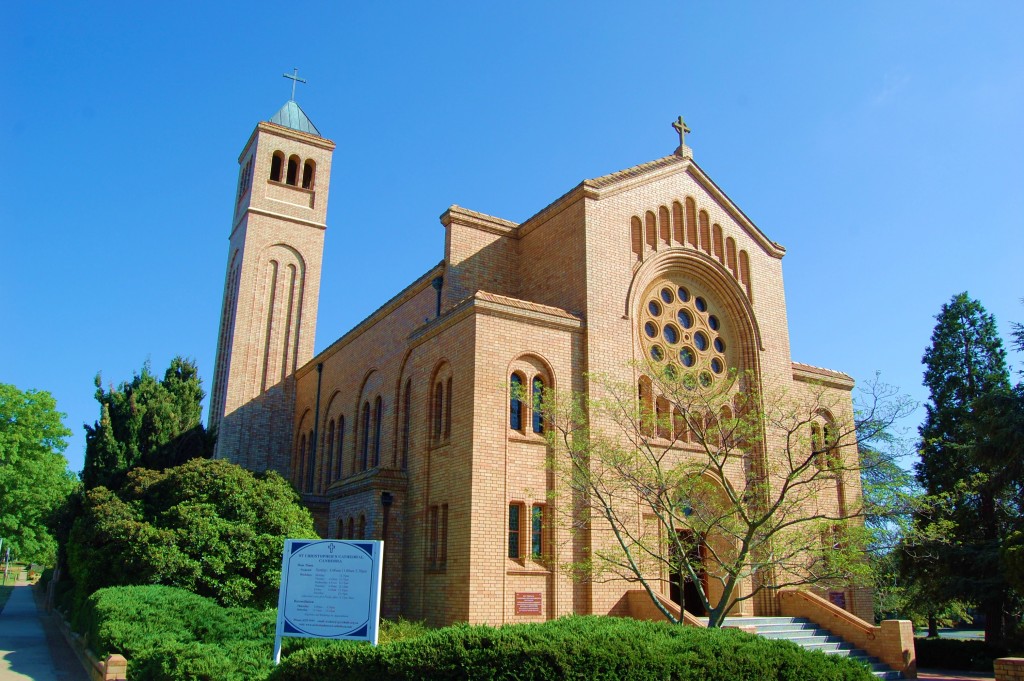 The Cathedral is the largest church in the national capital and the premier church of the Archdiocese of Canberra and Goulburn. The word Cathedral is derived from the Greek  ‘kathedra’, meaning  throne or elevated seat.  The Cathedral is the church where the Archbishop has his seat, where he presides, teaches and leads worship for the whole Catholic community. St Christopher’s was  built as the first parish church of Canberra by the first pastor, Father Patrick Haydon, although the beginnings of Catholic life in the district stretch back to 1862, when the Diocese of Goulburn was founded.  On 30 January 1927, in the time of Bishop John Barry,  there was a national Catholic pilgrimage to Canberra for the laying of the foundation stones of St Christopher’s Church and School by Archbishop Kelly of Sydney and of the  Convent by Archbishop Mannix of Melbourne.

From Christmas 1927, the Catholic community of Canberra had begun to assemble for Mass in the hall of the new St. Christopher’s School.  On 26 February 1928, there was a second national pilgrimage during  which the new St Christopher’s School was blessed and opened.  On 27 February 1928, St Christopher’s Parish was established with Father Patrick Haydon appointed first Parish Priest. On 28 January 1928, the Sisters of the Good Samaritan arrived to staff the new school and classes began. The event was attended by then Prime Minister, Stanley Bruce. In 1935, the first school principal, Mother Dympna, died.  She was  commemorated in the marble altar of the church then being planned. It is still the altar of the Cathedral, inscribed with a dedication to Mother Dympna.

In 1936, Father Haydon was appointed Dean of Canberra, and it is to him that St Christopher’s owes its existence. Following the Depression, Father Haydon decided to build a church for Canberra, and the foundation stone was laid on 8 May 1938 by Archbishop Gilroy of Sydney. The ceremony was attended by the then Prime Minister, Joseph Lyons,  and the former Prime Minister, James Scullin.  It was dedicated to St Christopher because it was thought that Canberra (which means “meeting place”) would be a place to which many  travellers would come. On 4 June 1939, the parish church of St Christopher was officially  opened by the Apostolic Delegate, Archbishop Panico, in the presence of the new Prime Minister, Robert Menzies. St Christopher’s striking Spanish Romanesque style was the work of the Sydney architect Clement Glancy.

In 1940 Father Haydon was appointed Vicar General of the Diocese of Goulburn, and on 16 March 1941 he was invested by the Apostolic Delegate as Protonotary Apostolic, and the parish celebrated its new Monsignor. In 1947, the first Ordination in Canberra took place. Fr Vivian Morrison, son of the pioneering family of “Tralee” Queanbeyan, who donated the tower and bells of the extended Cathedral, was ordained to the priesthood. The Archdiocese of Canberra and Goulburn was formally established on 5 February 1948, although the first Archbishop, Dr Terence McGuire, continued to reside in Goulburn. On 19 April 1949, Monsignor Haydon died. He was described as “respected by all churchmen as he has been loved by his own flock”.  A memorial to him was added to the Parish in 1962 when the Haydon Catholic Centre and  Library was opened on the Cathedral site. In 1955, Archbishop Eris O’Brien took up residence in Canberra. Archbishop Thomas Cahill succeeded him in 1967 and under his direction, in March 1972 the extension of St Christopher’s was commenced to double its seating  capacity and to provide adequate liturgical space. This work, which retained the magnificent stained glass windows of the original church, was completed in February 1973 according to plans developed by Clement Glancy, son of the original architect. The plans for the enlarged church included the bell tower, Blessed Sacrament Chapel, large sacristies and a crypt.  The extensions were consecrated by Archbishop Cahill on 5 February 1973, the  Silver Jubilee of the Archdiocese, and the extended St Christopher’s became the Cathedral Church of the Archdiocese of Canberra and Goulburn.

Archbishop Cahill died in 1978 and was succeeded by Archbishop Edward Clancy (1979- 1983) and  Archbishop Francis Carroll (1983-2006).  In June 2008, under the direction of Archbishop Mark Coleridge, the Cathedral was refurbished to mark the Diamond Jubilee of the Archdiocese. It is unlikely that any other church will ever claim the distinction of having four Prime Ministers as parishioners: Scullin, Lyons, Forde and Chifley.  Yet it was the unsung work of humble and generous men and women which leaves us in possession of this splendid place of worship.  A gift from the past to present and future  generations, St Christopher’s Cathedral remains an enduring testimony to a community united in faith under one Shepherd, Jesus Christ. 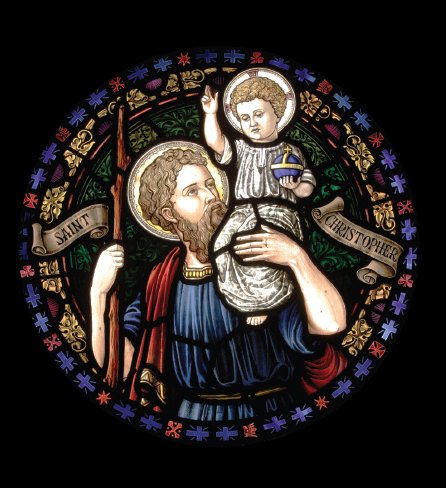 Archbishop Christopher Prowse’s reflections on the Cathedral of St Christopher’s in his installation homily:

“So here I am as your new Archbishop. It is “Christopher” who greets you now. I want to be “Christopher” for you. I want to carry you and your burdens to Jesus, the great burden-bearer, across the dangerous river of life.

I resonate with the Second Reading of this Mass and say I am only a fragile earthenware vessel that makes this invitation to you. Our Christian boast makes it quite clear, however, “that the immensity of the power is God’s and not our own. We are subjected to every kind of hardship, but never distressed; we see no way out but never despair” (2Cor 4:7-8).

So will you let this earthenware vessel carry you to Jesus in the times ahead as your Archbishop?

I am knocking at the door of the Archdiocese of Canberra & Goulburn. On the one hand we really do not know each other. But, on the other hand, in our common Baptism, Confirmation and Eucharist, we know each other in the Sacred Heart of Jesus and the Immaculate Heart of Mary. So please let me into your hearts to lead you into the Heart of Divine Mercy, Jesus himself alive in our Catholic Faith. Please pray for me.

Secondly I make my humble request for entry in this fine Cathedral that incredibly bears the same name: St Christopher. It is Christopher knocking at the Cathedral door of St. Christopher’s!

This Cathedral, like all Cathedrals, derives its name from the bishop’s chair (the ‘cathedra’). It is from this chair that the bishop presides over the Liturgy. By symbolic extension, it is from here that the Bishop ‘carries Christ’ to the entire Archdiocese as the visible agent of unity in teaching, sanctifying and governing. I am the seventh Archbishop. The former bishops of Canberra & Goulburn, Archbishop Frank Carroll (who would like to have been present) and Archbishop Mark Coleridge (present) and those who have died, have been successors of the apostles in service of the Gospel. I thank them sincerely for all their gospel efforts for this great Archdiocese. Let us pray for them in this Mass.

I look forward, in the years ahead, to listen to you all and to hear you recount the Gospel energies that have gone forth from this St. Christopher’s Cathedral and also from St. Peter & Paul’s in Goulburn, to all in this large and diverse Archdiocese. Starting 150 years ago in 1862, from the coast to the plains, from the mountains to the cities – how have you carried Christ to the peoples of this place? How have you carried the poor, the lost, and marginalised to Jesus, the Good Shepherd?

The First Reading draws out the key words of our faith to help us adjudicate the ‘how’ of our apostolic endeavours. These words – “great kindness”, “mercy”, “abundance”, faithful love”, “love and pity”, “lifted them up”, “carried them” (Isaiah 63:7-9) – must all be the attitudes that motivate all we do. It is the centrality and love of Jesus that must animate everything we do.

“Starting afresh from Christ” is our first response (Novo Millennio Ineunte 28-29). Otherwise, St Christopher’s Cathedral will simply be “Head Office” rather than “the eternal pomegranate” that bursts forth from this sacramental liturgical centre the seeds of the Gospel to the entire Archdiocese and far beyond.

We look particularly in our times to our Holy Father, Pope Francis’ example for our apostolic motivations. He seems to be developing a highly symbolic and prophetic Papal Magisterium that teaches mostly by simple actions of loving kindness, humility and mercy to the poor and marginalised. Let us follow his inspired example.”