This God, with whom we are invited to be in relationship, comes to us in a specific way. That is to say, when we say ‘God’ we mean God as revealed in the person of Jesus Christ, into whose life you are invited and sustained by means of the sacraments, a life of prayer and the living in accord with the teachings of the Body of Christ. With this in mind, in this section we look at the three sacraments that initiate us into this relationship, beginning with an explanation of the process most usually utilised by the Church: the Rite of the Christian Initiation of Adults (RCIA). The section concludes by noting that our entry into the Body of Christ, as men and women called into this loving relationship with God, is not intended as our own private possession. We are called to proclaim our relationship with God in everything we say and do.

The Rite of Christian Initiation of Adults is a process universally restored in the Roman Catholic Church in the 1970’s to prepare unbaptised adults for membership in the Church. Also called ‘the Catechumenate’, this process of Christian initiation has several stages and ritual steps, leading up to the reception of all three sacraments of Initiation: Baptism, Confirmation and Eucharist, usually at the Easter Vigil. People undertaking this journey of initiation are called ‘catechumens.’

If you have already been baptised Catholic, but have not been Confirmed or received your First Communion, then the Parish Priest would normally request that you join the RCIA process.  People undertaking this journey are called “candidates”.

If you have been baptised in another Christian tradition and wish to become a Catholic, your baptism is fully recognised by the Catholic Church.  Baptism can only be celebrated once.  Your parish will probably wish to see your original baptism certificate to ensure that it  was a Christian baptism, and then you will be invited to join the RCIA process as a “candidate”.

Finally, if you have been away from the Catholic Church for a long period of time, and wish to reconnect with the churches teachings, then the RCIA process might be a suitable place to start.  This can best be worked out by contacting your local parish.  If you require further assistance please contact Parish Pastoral Support on 6163 4300

The early Christians had nothing but the power of baptism, which gave them apostolic courage, the strength of the Spirit. Do Christians today really believe in the power of their baptism? Believers must be faithful to the Spirit, to proclaim Jesus with our lives, through our witness and our words. [Pope Francis, Homily, April 16 2013]

Along with the Eucharist, Baptism is the foundation of all the Church’s sacramental life and ministry. Through Baptism the believer is endowed with three things: 1. A Christian identity 2. A Christian world view and 3. A calling to live out the Gospel. The fact is many of the theological and pastoral challenges the Church encounters among its people can be traced to a lack of consciousness of what it means to be baptised. For example, without a clear understanding of what it means to be baptised, the Christian sacrament of Marriage makes no sense. In the same way, through living out one’s Baptism one becomes open to a call to ministry. Baptism is the foundation for laity and ordained alike to share in the priesthood of Christ. The call to holiness, to mission and to service in our daily lives has Baptismal and Eucharistic foundations. 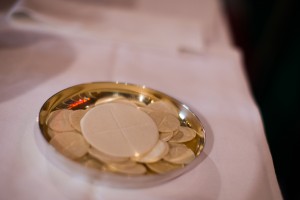 The Eucharist is the most profound experience of God that the Church can offer. It is here that we are nurtured by the life-giving death and resurrection of Jesus, fed his body and blood, taught by his sacred word, and supported and challenged by all the members of the Body of Christ.

It would be almost impossible to overemphasise the centrality of the Eucharist to the life, mission and prayer of the Catholic Church. The Eucharist is the central action of Catholic Christians and the core action of the Church. What we mean by this is, among other things, it is at the heart of our faith and gives meaning to every aspect of that faith. This is so because it is the sacramental participation in the life, death and resurrection of Jesus. It makes us who we are. These realities are the defining realities for the Church. It is by entering into them and integrating them into one’s life, that the individual becomes ‘Christian’. This is one of the reasons why the Eucharist is the culmination of the sacraments of Initiation.

Confirmation is an important sacrament in the life of young and new Catholics. It is possible to regard this sacrament as that symbolic action in which the Church prays for a special effectiveness of the Holy Spirit in, and for, a baptised person. The intent is that in Confirmation, the baptised recall their own Baptism, become conscious of an intimate union with Jesus Christ and strengthen both the orientation of their whole lives to Jesus Christ (‘conversion’) and their deepened acceptance of the faith of the Church. This can be accompanied by a new, personal commitment to live as a witness for that faith in the world and a commitment to mission.

The understanding behind this is that this is more than just a mere human invention. You have to keep in mind the principle that the Church is the sacramental representation of Jesus Christ. In this context, the implication of this principle is that it is the mission of Christ that is being continued through the confirmed person as part of the wider body of Christ. We participate in the mission of Christ by means of the power of the Holy Spirit who is received in Confirmation.

I have been crucified with Christ and yet I am alive; yet it is no longer I, but Christ living in me. The life that I am now living, subject to the limitation of human nature, I am living in faith, faith in the Son of God who loved me and gave himself for me. [Galatians 2:19 -21]

Learning what it means to live the life that Paul is writing of here is the work of a lifetime. For this reason, we can say that we are always in the process of understanding our mission as sons and daughters of God. We always have more to learn about who we are called to be and what we are called to do.

If you think you’ve already got it all sorted out, answer these few questions for yourself: who owns your time, who owns your energy, who owns your heart? If, like me, you find yourself thinking that really these all belong to me, then be aware that we have more to learn.

In this we are reminded of the very beginnings of the Christian faith, where a small group of disparate people were invited by Jesus to form his most intimate community. As was the case with the first disciples, why a person is asked to enter into this relationship is something of a mystery. Certainly it is not a reason for self-congratulation. The first disciples were not noted for being anything special other than for the fact that they were called by Jesus and were willing to say ‘Yes’. As such, they provide the model that the Church has witnessed again and again down through the centuries: groups of ordinary men and women who respond to God’s call to stay close to Jesus, who are formed by him and who are then called to mission. They become salt, light, and leaven – participating in the transformation of the world mainly in small ways, but occasionally in big, through their own on-going willingness to be transformed into and by faith, hope and love. It is for this reason we can say that our mission and our on-going conversion are so fundamentally linked as to become one and the same. Who we are and what we are called to be are in fact synonymous – every aspect of our lives transformed in Christ.