100 years of Mass for Delegate church

Twelve months after marking the centenary their church’s foundation stone being laid, parishioners of St Joseph’s Delegate were back in celebration mode last month 100 years after the first Mass in their red-brick church.

The current building in Church Street – the second Catholic church in Delegate – was completed in 1916. 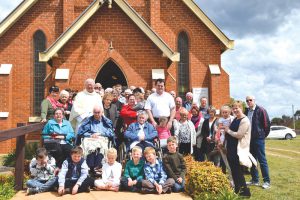 Delegate parishioners pose at the front of their church after Mass. Picture: John McLaurin.

The first church was replaced to cater for the growing numbers of parishioners.

Festivities began with the parish holding an ecumenical trivia night with members of other Christian churches in the town taking part.

The next day parishioners initially gathered at the town cemetery where they honoured Catholic pioneers of the town.

Fr Mick MacAndrew blessed a number of the graves and paid respect to deceased members who played a pivotal role in the establishment of the Catholic faith in Delegate.

“We gather here to remember those who have gone before us marked with the sign of faith,” he said.

“Let their example be a shining light for us as we walk side by side in Christian example.”

After the blessing ceremony, parishioners returned to the church for Mass, a lively affair with the angelus bell rung loud and proud.

The choir was in full voice and the children under instruction from Sr Teresa Keane RSJ added colour to the offertory procession.

Fr MacAndrew delivered a homily on Christian virtue and repeated the same address on ‘Why Catholics build churches’ given by former Sydney Archbishop Michael Kelly 100 years ago.

At lunch after Mass, long-time parishioner Clive Cottrell recalled the days of going to school in what is now the parish hall.

A main organiser of the celebrations, Greg Crotty, was pleased with the turn-out. He hopes the mid-October gathering can become an annual fixture on the parish’s calendar.

“It is really important for our parish that we celebrate our lives together at least once a year,” he said.“We are wanting to hold a return-to-Delegate weekend in October or November every year.

During the speeches, Mr Crotty put a vote to those present that the parish hall be re-named St Joseph’s School Centre, due to most people remembering it as the old St Joseph’s Primary School.

The idea was unanimously approved on the spot.

St Joseph’s School Centre displays a century worth of parish memorabilia along with vast family history from Catholic people in the town.

The centre also features a well-equipped modernised kitchen, donated by the Crotty family, in memory of Madge Crotty.

Mr Crotty said the Delegate parish was a “small, but proud and dedicated one”.

He flagged a couple of new developments which he says “are on the horizon.

“A local family has already offered to install a new ramp at the centre and are just waiting on us to give the go ahead,” he said.

Mr Crotty said the parish was keen to repaint the building, but before doing that they need to install a wider entrance to allow better access for mobility impaired and replace some old louvred windows.

He called on the wider community to help offset some of the cost.

“Someone may have some suitable doors or windows they don’t need for which we would be most grateful,” he said.

For more information email joeysdelegate@gmail.com or contact Greg Crotty on 0427 229 553.