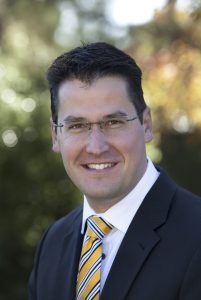 LIBERAL Senator for the ACT Zed Seselja says there are a number of incorrect and misleading statements in a front-page report in last month’s Catholic Voice with the headline Cuts will put ‘hundreds at risk’.

In a statement, Senator Seselja took issue with the opening sentence, “CatholicCare and St Vincent de Paul… [are] calling on the Federal Government to reconsider its intention to axe $1.3 billion from the National Affordable Housing Agreement”

He said this seriously mischaracterised the Government’s position and intentions on the issues.

He said the Commonwealth Government spent more than $6 billion annually on housing and homelessness, including the $1.3 billion National Affordable Housing Agreement (NAHA), $117 million on the National Partnership Agreement on Homelessness (NPAH) and $4.5 billion on Commonwealth Rent Assistance.

“The Government has no plans to discontinue this funding,” he said.

Senator Seselja said the statement that “The Federal Government has argued that the national agreement has failed to deliver any meaningful outcomes”, was not an accurate reflection on its arguments regarding the NAHA.

“The Government understands many organisations are doing good work with funding through NAHA and NPAH, and some of these organisations have achieved good outcomes,” he said.

“But it is unarguable that against its own criteria, the NAHA has not met its goals.

“The 2016 COAG Report on Performance confirmed that through 8 years and $9 billion the NAHA has failed against its own performance criteria.”