Above all, he was a man of prayer

The Canberra and Goulburn Catholic community lost one of its favourite sons earlier this year when Fr Peter Cronin lost his battle with dementia on June 28.

Archbishop Christopher Prowse presided over the funeral Mass which was held at St Christopher’s Cathedral, Manuka on Tuesday, July 5.

Speaking to the congregation, Archbishop Prowse described the recently deceased priest as someone who lead an “extraordinary life.”

Before he became a priest, Fr Peter was married for 36 years. His dear wife Maureen passed away in December 1987, leaving behind her husband and their six children. 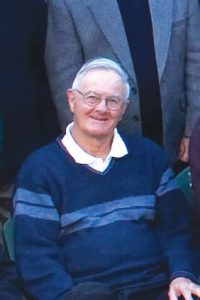 At the end of 1988, he discussed the idea of ordination with his parish priest, Fr Bill Kennedy and was accepted for seminary studies in 1990.

Ordained a priest by Bishop Pat Power at St Thomas the Apostle Church, Kambah, on December 17, 1993, Fr Cronin would go on to serve the parishes of Wanniassa and Pambula before retiring to his home in Gordon in 2009.

Preceding the requiem Mass, Fr Peter’s son, Damien, delivered a well-received eulogy to a near packed Cathedral. He shared the unique perspective as being one of the priest’s six children.

Damien gave an insight into the more human side of his father with humour a common thread in recalling Fr Peter’s life.

Emeritus Archbishop of Canberra Goulburn, Francis Carroll and Auxiliary Bishop Pat Power were also present at the requiem Mass, while a large contingent of priests from throughout the Archdiocese were on hand to concelebrate on the day.

Fr Tom Thornton, a fellow priest and close friend of Fr Peter’s gave the homily. Fr Tom described a number of personal encounters he had with a man he knew as a friend and brother priest.

Fr Tom defined the life of his friend when he told the congregation that “above all, Peter was a man of prayer.”

After the funeral, Fr Cronin was laid to rest at the Gungahlin Cemetery in Lomond Place, Mitchell.

Following the burial, the family and a number of close friends convened afterwards for light refreshments amid mixed emotions.

On one hand they commiserated at the passing of Fr Peter and on the other hand they celebrated what really was an extraordinary life.

As well as leaving behind his brother priests, Fr Peter is survived by his six children – Marilyn, Bernadette, Anne, Mark, Anthony, Damien and their immediate families.