Anguish that lies behind the smile of this refugee 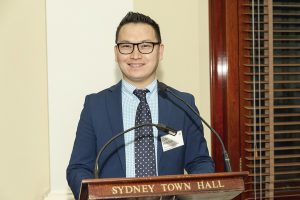 BEING on a boat at sea for five days without food and very little water, Afghani born refugee, Zaki Haidari thought he was going to die.

“The boat I was on was broken and we were about to sink, but luckily we were rescued by the Australian Navy,” he said.

Mr Haidari never thought he would ever see his family again when he first got on the boat.

Each day, he remains gravely concerned for the safety of the remaining members of his family, which includes his mother and six siblings.

This month, he is visiting his family in Karachi, Pakistan, because it is “not safe” for him to meet them in his home country of Afghanistan.

“My eventual goal is to bring my family out to Australia in the near future,” he said.

“In my home country, the Taliban are everywhere and they know everyone in the village, so it is almost impossible to escape and everyone lives in constant fear for their life.

“I am one of the fortunate ones.”

Refugee week (June 18 to 24) has come and gone for this year, but Mr Haidari, 23, insists that the conversations about refugees must continue.

Before coming to Australia, Mr Haidari lost his father (a medical doctor) and brother to the Taliban regime. His father is missing, while his brother was killed.

He is part of the Hazara people, an ethnic minority of people (Shia Muslims), who are brutally targeted by the Taliban because of their religion and ethnicity.

Hazara people are easily identifiable and Mr Haidari says the Taliban would never allow he and his people to join them, such is the divide.

Growing up in a hostile environment means the “new Australian”, will most likely have to battle post traumatic stress for the rest of his life.

Currently he is getting psychiatric help, but the anxiety is deep-rooted.

Since arriving ‘down under’ five years ago, he has already called both Sydney and Canberra ‘home’.

Residing now in a unit owned by Holy Trinity Parish, Curtin, he has felt the love and warm hospitality, which Fr Tony Frey and his ministry team are providing.

Making a “fresh start”, Mr Haidari has resilience many of us will never have and sure is making a good go of life in the ACT – often whilst battling immigration policy visa restrictions.

“It’s not good when you are continually wondering whether or not you will be sent back,” he said.

His father had always taught him about the value of education and he is relishing the opportunity to study in Australia, so much so that in 2015 he e was awarded NSW International Student of the Year.

After learning English for three months upon arriving to Australia, he now has a Certificate IV in Business, Certificate IV in Design, Diploma of Graphic Design and a Diploma in Information Technology to his name.

“Currently I am completing a Bachelor of Business and Marketing at Martin College,” he said.

“I am also grateful to have full time employment at Australian National University as an admissions officer.”

Mr Haidari is required to stay upbeat at work, because it is the nature of the role.

Beneath the front desk smile however, is a man struggling to make sense of what has happened to him and his family.