A technology app which will change the way future money collection is done at Mass is being trialled at two parishes.

In what is a world first, the Archdiocese has moved to cater to an increasingly cashless society by trialling the app known as QKR! for parishes. 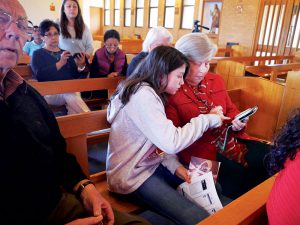 Parishioners at Mary Help of Christians Parish South Woden have their heads down into their devices installing QKR! Picture: Jeanine Doyle.

Designed by MasterCard Labs Sydney, QKR! for parishes gives members of the congregation the option to make their weekend Mass collection contribution electronically.

QKR! is already being used in a number of schools in the Archdiocese and can be downloaded from iPhone, iPad, smartphone or android device.

The Archdiocesan Catholic Development Fund is the catalyst of the app in partnership with MasterCard and Commonwealth Bank Australia.

QKR! is being trialled in Mary Help of Christians Woden South and St Gregory’s Mission Queanbeyan, with more parishes expected to follow. 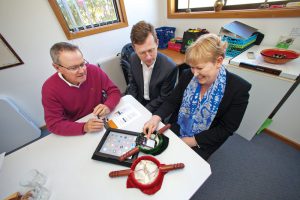 Fr Richard Thompson, Martin Collings and Michele Murdock discuss the advantages of having QKR! in the parishes. Picture: Loui Seselja.

They and others downloaded the app in a matter of minutes and were impressed with how quick and easy it was to set up.

“I am very excited about this and it is good that it is up and going. It’s been a good initiative,” Mr Dunn said.

“I am very impressed at how the app allows you to contribute not just to parish collections, but also to the various appeals,” Ms Delahunty said.

QKR! for parishes was rolled out in Woden South and Queanbeyan parishes for Masses on the weekend of October 22 and 23.

Fr Thompson said it drew some “very positive responses from among parishioners”.

A strong advocate for the app, Fr Thompson said “proper implementation and ongoing support” was the key and is critical to QKR!’s success.

“It is very important that we use the right language and that we support people in the right manner when we are introducing a new product like this. “I will speak to many of my brother priests as to how we should best go about informing our parishioners in setting up and using the app.
“I include those with ‘technophobia’.

“We also want to make it very clear that QKR! is not replacing the collection bags.

“The collection bags and QKR! as I see it will co-exist for quite some time yet, so people have nothing to worry about whatsoever.”

In his own parish, Fr Thompson will help educate parishioners by putting QKR! download and set-up instructions on the overhead projector screen during collection time.

And he hasn’t put any time limits on its implementation.

The Archdiocese has produced an easy-to-follow, illustrated step-by-step guide for parishioners on how to use QKR!

In addition to this, a new ‘Giving’ brochure will be sent to parishes, to complement the trial.

Fr Thompson says that he will run “15 to 20 minute workshops after Mass if needed, maybe even a quick video”.

Mr Collings from MasterCard Labs confirmed that the Archdiocese was the first church body to trial QKR! in its parishes.

He and his team designed it after being approached by Mrs Murdock, who was commissioned by Vicar General Fr Tony Percy to investigate ways to renew parish income through collections.

Mrs Murdock looked at QKR’s success in schools and knew she had a “tried and proven” product to work with.

“QKR! for schools commenced in the Archdiocese over two years ago, allowing parents to make payments to their school for everything from canteen and uniform shop orders to excursion, sporting and school fees,” she said.

“It has grown to cover 28 schools with more than 60 accounts connected to the facility, much to the delight of many school finance secretaries and parents.

“The Archdiocesan committee identified the QKR! app as a vehicle to access the generosity of parishioners who operate in a card paying economy without cash.”