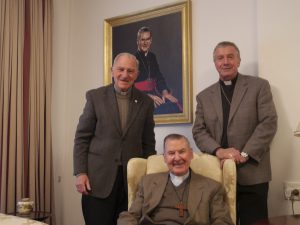 FIFTY years to the day of his ordination as bishop, Emeritus Archbishop Francis Carroll celebrated in Canberra reflecting with gratitude on his episcopal life.
To mark the anniversary on September 5, he was joined for a gathering at Archbishop’s House by Archbishop Christopher Prowse and a number of religious. Several priests, deacons and lay people of the Archdiocese attended also.
A thanksgiving Mass and dinner took place later in the evening with Bishop Pat Power and close friends.
Archbishop Carroll said he was initially surprised to be made a bishop, “way back in 1967”, and showed his appreciation to those who have been with him to this point.
“I think the main sentiment would be one of gratitude, first of all to God who called me and has sustained me over these years, and then gratitude to the many, many people,” he said.
“My family, of course, have always been very supportive.”
He nominated being the first bishop to welcome Pope St John Paul II to Australia in 1986 as well as Archdiocesan synods in 1989 and 2003 as highlights of his ministry.
He paid tribute to the numerous “wonderful lay people” that he has encountered and said he has always received good support from clergy wherever he went, noting “many happy relationships”.
He said the scourge of institutional child sex abuse by members of the Church had been most disappointing and had overshadowed much of the good work done by the Church over many years.
Regarding the 2020 Plenary Council, he said that with “good preparation of prayer and work”, it could be a decisive event in the life of the Catholic Church in Australia.
Archbishop Carroll was Archbishop of Canberra and Goulburn from 1983 to 2006.
He grew up on a farm at Ganmain, was educated at the local convent school, before moving to Sydney and finishing his secondary studies with the De La Salle Brothers in Marrickville.
In 1946, he entered the seminary at St Columba’s Seminary Springwood at the age of 16 and two years later went on to St Patrick’s Seminary Manly. He was ordained a priest by Bishop Henschke in St Brendan’s Church, Ganmain, on July 27, 1954.
From 1967, he was the coadjutor bishop of the Diocese of Wagga Wagga, ministering alongside Bishop Henschke, who was ill at the time and died six months later.
“Bishop Henschke was a mentor to me, he confirmed me, ordained me a priest and ordained me a bishop,” Archbishop Carroll said.
Thirty-six at the time of his episcopal ordination, Archbishop Carroll is the youngest bishop to be ordained in Australia since Vatican II (1962-65).
He said the episcopal ordination took place at the now removed Plaza Theatre in Baylis Street, Wagga Wagga, to allow 1800 people to attend.
These days he is happily retired in Wagga Wagga and says he is in good health, having just turned 87.
He maintains a keen interest in both the Archdiocese and the Diocese of Wagga Wagga, regularly doing priest supply work when required.
He nominates Catholic education, Kairos Prison Ministry and the implementation of Vatican II, as three of the more important parts to his legacy.
“For me one of the great graces in my life was studying Canon Law in Rome during the Second Vatican Council,” he said.
“That became my ideal for the rest of my time as bishop.”
Giving advice to Christians in tough times, amid an ever-more secular society, Archbishop Carroll said Catholics needed to stay strong, while taking on a more contemplative dimension in their faith.
Borrowing a phrase from St Mother Teresa of Kolkata, he said “God has not called us to be successful, but he has called us to be faithful”.
Congratulations on the milestone Archbishop Carroll!