TWO priests from Kerala, the Catholic heart of India, have arrived in the Archdiocese of Canberra and Goulburn after being transferred from their own dioceses.

A priest of the Missionaries of Our Lady of La Salette (MS), Fr Jiss was sent to Australia as a replacement for Fr Joseph Punnakunnel MS, who recently returned to India.

He has already commenced his role as assistant priest in the parishes of Gundagai, Jugiong and Tumut, where he resides with parish priest Fr Sijo Jose MS. 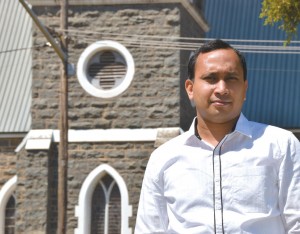 The 30-year-old said he greatly enjoyed celebrating Christmas in Australia, a country he had never visited previously.

“I had a lovely Christmas in Australia and I celebrated Mass at Gundagai and Jugiong… it was a wonderful experience,” he said.

“I am very happy to be here and I am happy to serve with full commitment to the Archdiocese.”

Fr Jiss said one of the main differences he’s observed already between the Australian Church and the Indian Church is the number of Mass-goers.

“In India, churches are crowded,” he said. “In Australia, we don’t find as many people, but there is a deep faith… they are very authentic and committed, and they show a lot of hospitality to their priests here.”

A cricket and basketball enthusiast, Fr Jiss entered the seminary after completing high school, motivated by a strong devotion to Our Lady.

“In Year 8 I happened to attend a retreat where a priest spoke a lot about the Rosary, so I started reciting the Rosary,” he explained.

“Later, my hometown priest invited me to join the Order, and I decided I would.”

After his ordination in 2012, Fr Jiss spent a year serving in a parish and another year living in community with other members of the Order.

Fr Johny, who has been assisting at Gungahlin parish temporarily, was ordained to the priesthood as a member of the Society of Oblates of the Sacred Heart in 1993.

For 21 years he served in a number of different roles and locations, including as youth director of the Kottayam Diocese and as spiritual leader of the seminary.

In October 2014 the 48-year-old visited his four siblings, who have lived in Canberra for almost a decade, and it was during this visit that he felt called to minister in this Archdiocese.

“I went to see Archbishop Christopher, we had a friendly talk and I said I would like to work here because my siblings are here, and he accepted me,” Fr Johny explained. “My bishop has allowed me to stay here for up to 10 years.”

It is expected that Fr Johny will receive a permanent appointment in the near future.