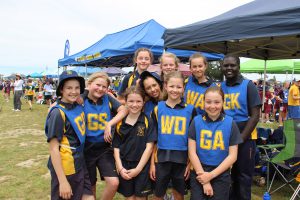 About 4000 students from 49 schools have taken part in the annual Boorowa Sports Carnival, said to be the largest primary school carnival in NSW.

Schools came from as far away as Braidwood and Goulburn for the largely social competition which was an opportunity for students to mingle in a fun filled environment with scores not recorded.

The aim of the day is for students to enjoy participating in the games along with their friends and peers with no winners or losers.

Hosted by both St Joseph’s Primary as well as Boorowa Central School, the event went well despite some threatening weather.

“On behalf of the schools I would like to thank the carnival co-coordinators at each participating school for their efforts and hard work in organising their teams, their coaches, their referees and travel,” he said.