ARCHBISHOP Christopher Prowse joined members of the Canberra Circle of the Catenian Association and their wives to celebrate the Circle’s 200th meeting on February 26 at the Canberra Southern Cross Club.

The Archbishop said the Circle provided valuable social and spiritual support to its members. 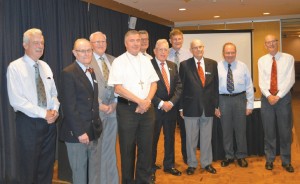 He spoke about a typical day in the life of an Archbishop, and drawing upon people he had met that day, he encouraged the Circle to find ways of helping Indigenous people, who are the most disadvantaged group in the Australian community, and young people.

The Catenian Association is an international group of practicing Catholic laymen who meet socially, at least once a month.

There are about 300 local branches or Circles around the world and more than 30 in Australia. The Canberra Circle was inaugurated in October 1997 and a large number of the original members were present for the 200th meeting.

Those interested in finding out more about the Association can contact the Canberra Circle secretary, John Malycha, at canberracatenians@yahoo.com.au or view the Circle’s website at www.canberracatenians.com.