LARGE numbers of friends of the Carmelite Sisters gathered at their Red Hill convent on October 1 and October 15 to celebrate the feast days of St Therese of Lisieux and St Teresa of Avila.

A feature of the October 1 Mass was the blessing and distribution of roses by young children, in honour of the saint known as ‘The Little Flower’.

Fr Martins Aloga, who celebrated the Mass, praised the youngest of the three female Doctors of the Church during his homily.

“She went into religious life at the age of 15,” he said. “Her life was short, but her experience left us with many pages that we can read and so much inspiration that can draw us to Christ.”

St Therese provides us with an ideal example of someone who didn’t complain about her difficulties, but instead made the most of her abilities, Fr Martins said.

“If you look at her biographies, she was very frail and sickly… but in the spirit she was strong,” he said.

“We live today in a world of ambition. Many people are ambitious to be known as stars in the field of movies, sports, technology, fashion, and so on. But Therese only had ambition to be close to Christ.”

Archbishop Christopher Prowse celebrated Mass at the convent on October 15, with Papal Nuncio Archbishop Adolfo Yllana and several other clergy also in attendance. 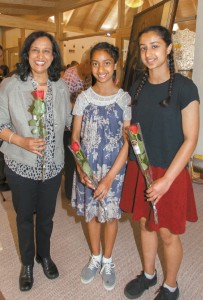 As part of the Mass in honour of St Therese of Lisieux on October 1 at the Carmelite convent in Red Hill, roses were blessed and distributed to those in the congregation. PHOTO: LOUI SESELJA

This year’s feast marked the 500th anniversary since the birth of St Teresa of Avila, and Archbishop Christopher said the great Carmelite saint’s way of life remained highly relevant.

“This past year I have conducted three retreats in the Archdiocese,” he said.

“In each of these retreats, I noticed a commonality. There is an insatiable thirst for contemplative life.

“The highlights of these retreats, according to the evaluation sheets, were the periods of silence and solitude that were encouraged.

“We need today, more than ever, the charism of St Teresa of Avila for meditative prayer to come afresh into our Catholic lives.”

St Teresa, the Archbishop added, was a woman of “immense understanding and wisdom”.

“All her biographers talk about her as a woman who attained great mystical affection, especially over a five to six year period of her life,” he said.

“She is also seen in her wisdom and understanding, as one of the great reformers and foundresses in the Catholic Church.”

After entering the convent at the age of 20, it wasn’t until she was in her 40s that St Teresa began to actively reform the Carmelite Order, Archbishop Christopher said.