THE SPIRITUAL WORKS OF MERCY: ADMONISH THE SINNER

ARGUABLY the most difficult spiritual work of mercy for an individual to perform is that of admonishing the sinner, yet it is an important duty for Catholics according to one of the Archdiocese’s most experienced confessors, Fr Kieran Adams OP.

The Dominican priest spoke to Catholic Voice recently about the spiritual work of mercy, in light of the 12 years he spent as a confessor at St Mary Major’s Basilica in Rome, where he would hear confessions on a full-time basis.

During those years, Fr Kieran says he had countless opportunities to ‘admonish’ – either through the Sacrament of Confession or though providing spiritual direction to individuals.

“To admonish a person, I think you have to take into account the situation, listen very carefully to what they’re saying, and see if they’re aware of what they’re doing,” he explains.

“When a person comes for spiritual direction, they come because they want to come closer to God, so therefore they’re already reaching out.

“In admonishing, we’re trying to lead the person away from a somewhat distorted view of God. God is always a God of mercy. In the Book of Isaiah, it says, ‘Though your sins are scarlet, they shall become as white as snow’. In other words, God is always there and is always reaching out to us.” 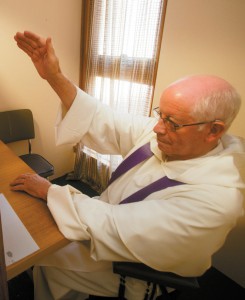 Fr Kieran Adams OP says every individual has a duty to admonish others in a charitable way. PHOTO: LOUI SESELJA

The word ‘admonish’ is derived from the Latin word ‘monere’, which means to warn or advise. Fraternal correction is something every individual has a duty to do, Fr Kieran says. “There’s a duty out of love for the other person, to say, ‘You can’t do that’,” he says. “It’s a duty for the overall good of the situation, where a person might need to be admonished.”

But in doing so, one must be careful and sensitive to the situation, in order to admonish with charity.

“As a confessor, the first thing to do is to listen to what they have to say, because you can’t get a full picture until they outline what the problem is, and also you might have to ask questions to get a fuller understanding,” Fr Kieran says.

“You have to be very sensitive in the questions that you’re asking and be gentle with them.

“I would say it’s the duty of the confessor to listen, if necessary to ask certain questions, and then offer advice… it comes back to the general welfare of the penitent and their relationship with God, that’s what the confessor’s all about.”

While it is possible that the response to admonition might be negative, Fr Kieran says most people are grateful for any advice or warnings, which are often exactly what they need to hear.

“You come across people with tunnel vision,” he says. “Sometimes people might just say ‘I’ve never thought of it that way before’, because they might come and talk about certain things from a particular angle.”

Like all the works of mercy, the duty to admonish the sinner has Scriptural origins that provide guidance on the appropriate way to practice the work of mercy.

The words of Jesus in the Gospel of Matthew are perhaps the clearest explanation found in the Bible: “If your brother sins against you, go and tell him his fault, between you and him alone. If he listens to you, you have gained your brother. But if he does not listen, take one or two others along with you, that every word may be confirmed by the evidence of two or three witnesses. If he refuses to listen to them, tell it to the church,” (Mt. 18:15-18).