A city graced by three saints

On the weekend in October 2010 that Mary MacKillop was canonised, I celebrated the vigil Mass in Queanbeyan. Knowing that Mary visited her Sisters in Bungendore on a number of occasions, I speculated that she ma 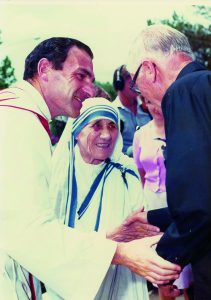 y have made the trip to Queanbeyan to do some shopping or for some other reason!

Father Brian Maher in his history of the Bungendore Catholic community records Mary MacKillop visiting Bungendore in July 1895, April 1899 and July and August 1901. The account of the 1895 visit has Mary travelling from Goulburn to Bungendore and returning, presumably, directly to Sydney.

The July 1899 visit shows Mary on a much longer visit travelling from the South Coast to Nimmitabel and catching a bus to Cooma where she was given hospitality by the local Sisters and priests. She was then driven to the Cooma railway station, paid 11 shillings and 6 pence ($1-15 in today’s currency) for a second class fare before catching the train to Bungendore where she arrived very tired at 10.30pm on 11 July. It is not recorded if she alighted from the train at Queanbeyan on that occasion, but she certainly graced the town with her presence. From Bungendore she made a trip to Captains Flat, calling at The Briars for a meal.

Another trip took place in July 1901. Seemingly, Mary was not daunted by the cold weather in which she encountered heavy snow. On that trip where Mary was looking at land for a convent for her Sisters, there was some suggestion that it might be built in Queanbeyan, but Mary felt that it was too far away from Bungendore. Sister Bernadette O’Sullivan RSJ, now stationed in Nimmitabel, has written a fascinating account of this missionary journey on which her Founder made her last visit to Bungendore.  In Sydney she boarded a train,  and stopped off at Mittagong before travelling on to Bungendore where she stayed several nights taking in Captains Flat, before proceeding to Araluen, Moruya, Bega, Cobargo, Candelo, Eden, Pambula, Bombala and Cooma where she again travelled by train to Bungendore before returning to Sydney. Once more, we do not know if she got off the train at Queanbeyan but the town can make some claim on her, having given at least one of its parishioners to her congregation in the person of Sister Betty McDonald RSJ.

The 1973 International Eucharistic Congress held in Melbourne from 18-25 February attracted a galaxy of overseas bishops and cardinals including Cardinal Karol Wojtyla, the Cardinal Archbishop of Krakow, Poland and future Pope John Paul II. As part of the Cardinal’s visit to Canberra where he was hosted by Archbishop Cahill and the Croatian Sisters, the future Pope as well as attending a dinner in his honour at Parliament House and celebrating Mass in St Christopher’s Cathedral, visited the strong contingent of Polish Catholics in Queanbeyan.

Both Czeslaw (Charlie) Sliwinski and Jozef (Joe) Baranowski vividly recall the reception given to their beloved Cardinal and countryman at the Polish Club in Cameron Road in Queanbeyan. Joe, as an eleven year old, had welcomed the Cardinal at the Canberra airport on 16 February and his mother, Teresa, had delivered the first reading at the Cathedral Mass. Charlie has provided a lovely photo of his nine year old daughter, Joanne, receiving a kiss from the Cardinal after presenting him with flowers.

Five years later, Cardinal Woytyla would be elected as the first non-Italian Pope for four hundred and fifty five years and would go on to become the second longest serving successor of St Peter as Bishop of Rome in his twenty seven year reign as Pope. During this time, he returned to Australia on two occasions: as part of a nation-wide visit in 1986 in which Canberra was the first stop and in 1995 for the Beatification of Mary MacKillop in Sydney. He did not have the opportunity to visit Queanbeyan on those visits, but the strong attendance of Polish Catholics (and many others!) at the special Mass in St Christopher’s Cathedral on 27 April 2014 to honour his canonisation  along with Pope John XXIII is evidence that he continues to be an inspiration.

If the visits to Queanbeyan by Mary MacKillop and Pope John Paul II were fleeting, those of Mother Teresa in 1981 and 1985 had a lasting influence on Queanbeyan and beyond with the presence of the much loved Missionaries of Charity.

It was following the 1981 visit that the community was established in West Avenue. Prior to that there had been in Canberra a group of Co-workers of Mother Teresa, including Erin and Reg Mills, Leoni and Brian Kelly and some others. They were keen to have a community of Mother Teresa’s Sisters come to Canberra and began making moves in that direction. Father John Butz, parish priest of Queanbeyan and former administrator of St Christopher’s Cathedral, made the astute suggestion that the Sisters would be more appropriately located in Queanbeyan. After some negotiation, the former home of Mrs Norris in 3 West Avenue was purchased by the parish for use as the convent. During her Queanbeyan visit, Mother Teresa gave an inspiring address to a packed congregation in St Raphael’s Church. Following Mother’s visit, Queanbeyan parishioners including Jan and Reg Halliburton, Sally Matijevic and Carolyn Connor set up in their city another group of Co-Workers of Mother Teresa.

In the beginning of February 1985, I began an appointment as parish priest of my home town of Queanbeyan.

I had only arrived a day or two earlier, when the superior of the Missionaries of Charity rang to say “Mother is visiting next week.” I presumed she was speaking of the superior for Australia, but in fact it was Mother Teresa. I was concerned about how we could best fall in with her wishes, but I was told it was all to be very low-key. We did, however, arrange for Mother to speak in St Raphael’s as she had done in 1981. She spoke on what we have to learn from the poorest of the poor while recognising their innate human dignity.

I will never forget the hour or more that Fr Ken Heffernan and I had speaking with Mother in the sacristy next to the Sisters’ chapel.

Nor will I forget the love with which she reached out to the extended family of my 41 year old cousin whose funeral took place the day before. Mother had suggested I invite them to Mass with the community in their chapel. She was a great comfort to them in their grief.

During the 1985 visit, she requested that a house be found for the Sisters so that vulnerable women and children could be cared for.

Through her determination and prayer, a place was found just over the road from the convent. Her great supporter, Father Greg Beath, arranged for a prayer service in St Christopher’s Cathedral so that more people would have the opportunity to be inspired by Mother Teresa.

We all hoped that Mother would visit Queanbeyan again and I wrote to her along those lines, but it was not to be with her many commitments and failing health.

Mother Teresa will be canonised on 4 September, but all who met her knew that they were in the presence of a living saint.

Her wonderful impact on Queanbeyan and its surrounds continues through her Sisters and the Co-workers. Their impact on the struggling members of the community, the enormous commitment they make to the children in government schools and the powerful witness before the whole community mean that the humble message of this great person will live on in Queanbeyan and beyond.

In this Jubilee Year of Mercy, the people of Queanbeyan can be encouraged by three great apostles of mercy in Mary MacKillop, Pope John Paul II and Mother Teresa.