Clever Harry making his mark on the entertainment industry 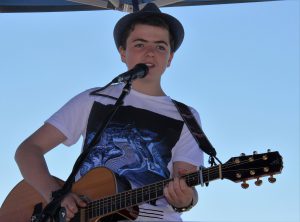 Young’s Harry Cleverdon is making his mark in the entertainment industry, after taking out the best new young male artist at the 2016 NSW Urbanstar, an underground song contest for unsigned artists.

Harry was declared teen champion and received a highly commended for his vocal solo in the open division.

“I love to entertain and really hope I can make music my future and my career,” he said.

At 14, the singer-songwriter and Year 8 student from Hennessy Catholic College, continues to showcase his talents.

Despite winning talent quests at Junee, Blacktown (Sydney), Wollongong, Thirroul and Quandialla, Harry remains humble and modest about his achievements.

He accompanies himself on piano, guitar and harmonica, and has held multiple scholarships from the Young Regional Conservatorium of Music.

He cites being admitted to a six-month rising star program for classical piano at the Sydney Conservatorium of Music in 2013 as a highlight.

He first came to when he won the primary school entry at the Australian National Busking Championships in Cooma in 2014.

Since then his talents have also seen him perform with considerable success at festivals all over NSW including at Tamworth, Tumbarumba, Young, Batlow, Grenfell, Canowindra and Harden, as well as at Floriade in Canberra.

Harry is generous with his talents and has performed at goodwill events for Can Assist, Seniors week, Cure for Brain Cancer and variety concerts.

His diary continues to fill up with requests to perform at weddings, birthday parties and business award dinners.

He has been approached to perform on television by popular television shows including The Voice and X-Factor, but he was considered too young for the 2016 auditions, with the cut-off age being 15.

Harry’s father Charlie is well aware of the talent which his son possesses and has made considerable efforts to take his son to performances. However, he said he “wouldn’t have it any other way”.

Likewise, mother Elke is also a keen supporter. “We are very proud of what he has achieved so far, but he is always the same Harry to us,” she said.

“He enjoys spending time with his family, younger sister and his dog Bella, and often rides motorbikes on the family farm and plays soccer.”

Harry has several events on the horizon, but he has also been putting time into debating at Hennessy Catholic College.

Last year he was part of the school’s Year 7 debating team which took out the NSW Catholic Schools State title. The same team of three (now in Year 8) qualified again this year and competed in Wollongong late last month.

His school music teacher, Mr William Stewart, said Harry was “one of those rare human beings who is an accomplished musician and composer but also always willing to help others”.