Cursillo Movement marks its golden anniversary in the Archdiocese 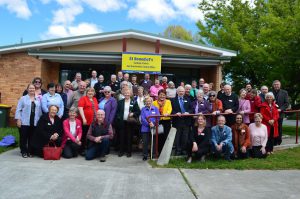 Members of the Cursillo meet to celebrate 50 years in the Archdiocese. Picture: Supplied.

The Cursillo Movement marked its golden anniversary in the Archdiocese with two special events.

An anniversary Mass held in St Christopher’s Cathedral and social afternoon was well supported with more than 50 people attending, while a spirituality weekend was full of life and activity.

Archbishop Christopher Prowse was principal celebrant at Mass along with Bishop Pat Power and Cursillo spiritual advisor Fr John Armstrong concelebrating. In his homily, Archbishop Prowse shared about his own Cursillo experience.

Representatives from the Wollongong Diocese and many long-time members of the Cursillo movement attended along with former spiritual directors Fr Bernie Patterson and Fr Allen Crowe.

After Mass, cursillistas made their way to St Benedict’s Parish, Narrabundah, for a social afternoon which featured an address by Fr Armstrong and a number of inspiring talks from Fr Patterson, Joy Harmer, Jeanne Montgomery, Brian Coates and John Duck.

Messages of support and congratulations were read out from well-wishers, including Fr Bernie Maxwell and John Cooney.

In his presentation, Fr Armstrong reflected on Proclamation of the Gospel and the Charism of the Cursillo Movement.

He gave a timely reminder that as God’s people, we, the Church, have a message that the world longs to hear – a message of love and hope.

For Pope Francis, this Gospel message is simply: “Jesus Christ loves you; he gave his life to save you; and now he is living at your side every day to enlighten, strengthen and free you.”

Mr Coates shared about his great love for Cursillo, ecumenism and how Cursillo had changed his life.

Mrs Harmer spoke about the importance of friendship and support that Cursillo provided during a difficult period in her life.

Recently elected as president of the Cursillo Movement in the Archdiocese, Mrs Montgomery from Grenfell spoke about her enthusiasm for Cursillo, having already served on team in the western deanery three times.

In October, the Archdiocesan Cursillo movement hosted a live-in spirituality weekend at the Warrambui Retreat and Conference Centre, Murrumbateman.

The retreat centred in on the theme ‘In the Heart of Pope Francis’ and explored some of the key statements and teachings of the Pope.

It drew on the documents; Evangelii Gaudium (the Joy of the Gospel), Laudato Si (Care for our Common Home), Amoris Laetitia (The Joy of Love), Lumen Fidei (The Light of Faith) and Misericordiae Vultus (The Extraordinary Jubilee Year of Mercy).

One of the many highlights was the recognition given to Fr Crowe, a long-time spiritual advisor who announced his retirement after 20 years in the movement.

Bishop Power, the keynote speaker, reflected on his life of service in the Archdiocese.

National coordinator for the Cursillo movement Joe Jambor said the weekend was a most blessed time with daily Mass, morning and evening prayers, short talks and meditations, discussion, music and a variety of activities.

“A feature of the weekend was the joy of friendship and the depth of personal sharing,” he said.

For more information about the Cursillo Movement go to www.cursillo.asn.au/