Newly ordained deacon Joshua Scott has described his ordination to the diaconate as “a wow moment”.

Deacon Scott was ordained at St Mary’s Church in his home town of Young by Archbishop Prowse on the feast of St John Paul II. 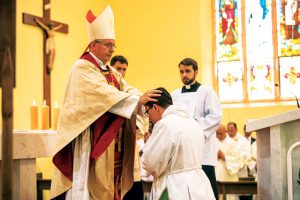 In delivering a thanksgiving speech, Deacon Scott gave thanks to God.

“Thank you Lord for bringing me here,” he said.

He then encouraged his fellow seminarians with the words: “Keep going brothers, keep going, it’s worth it, fight through.”

He thanked Archbishop Prowse for ordaining him and also for his fatherly support.

In his homily, Archbishop Prowse said Deacon Scott, a convert to the faith, had received four of the seven Sacraments from Fr Richard Thompson, former parish priest of Young.

“The first thing to be said about the diaconate is the word service,” he said.

“In the document of the Second Vatican Council, Lumen Gentium, the word service comes up when they talk about the diaconate.

“Indeed, when you look in the Acts of the Apostles in the New Testament, the diaconate grew out of a service need.”

Archbishop Prowse spoke about deacons “attending to those on the periphery” of life.

“The diaconate is a triplex function, like the Trinity,” he said.

Archbishop Prowse said the “engine room of being a deacon” is to be a man of prayer.

“The diaconate of service always brings people together, it never separates.” He paid tribute to the town of Young for nurturing priestly vocations.

“Thank you Young, I hope you remain forever Young in your heart, and not just in your name, so that there will be others nurtured here and that you will be able to be a good example to others,” Archbishop Prowse said.

Deacon Scott will now return to the seminary for the remainder of the year. He is expected to be ordained a priest towards the end of next year.