“POLITICS invades the space of justice when it comes to executions,” renowned barrister Julian McMahon told a crowd of almost 100 at the St Thomas More Forum on February 24 held at Holy Faith Hall in Campbell.

“All executions that I’m aware of are political, and Thomas More is a great example of that,” he added.

Mr McMahon is a Melbourne barrister who has worked on death penalty cases for more than 13 years, including the recent trials of Bali Nine members Myuran Sukumaran and Andrew Chan, who were convicted of drug smuggling and executed in Indonesia last year.

He is also the president of Reprieve Australia, an organisation opposed to the death penalty, and has worked on capital punishment cases in several countries. 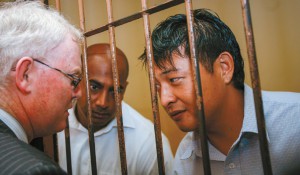 During his presentation at the forum, Mr McMahon spoke about the political undertones of the death penalty, the execution of St Thomas More, the cases he has worked on and the current international situation around the death penalty.

He even moved some audience members to tears when describing the final days of the Bali Nine pair, who he said, “died with enormous dignity and generosity”.

Mr McMahon also recalled his visit to St Thomas More’s prison room, which is no longer open to the public, and noted in particular the saint’s prison writings, which have been of comfort to many facing execution.

The 2015 Victorian Australian of the Year left the audience with “a moral injunction on you to pay attention to the world around you”.

“If we don’t speak out against whatever injustices we see, then we are failing,” Mr McMahon said.

When asked about the relationship between the death penalty and abortion, Mr McMahon reiterated the need to “respect life, each and every life, from the most abhorrent prisoner to the most helpless person suffering from dementia, to an unborn child”.

The objectives of the St Thomas More Forum are to promote discussion and debate on the challenges of faith in the modern world, to recognise the significance of the life of St Thomas More, and to develop a networking environment and opportunity to hear from stimulating speakers on topical issues.