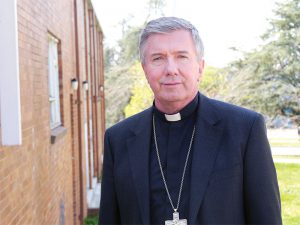 ARCHBISHOP Christopher Prowse has joined other bishops of Australia in speaking out on behalf of the Church for the “atrocities” which occurred during decades of child sex abuse.

“The Catholic Church is very grateful for the Royal Commission into child abuse,” he said.

“It has really helped us to focus on this issue and to assure future generations that these criminal acts will not happen in the future, please God.”

Appearing before the Commission on day 11 of the hearings, Archbishop Prowse discussed the “gravity” and “scourge” of the sex abuse and he forecast what things will look like going forward.

“As a consequence of these sessions here, I have it in my heart to go around the dioceses for listening sessions,” he said.

“I want to gather the victims and their families.

“I want to go out and find the victims I’ve met over the years – I call them wounded healers.

“I don’t think we can go ahead without the wounded healers standing alongside us, walking together, correcting us, directing us, working in with us.”

He also spoke of the need to work transparently with governments saying that the Catholic Church did not have the means to deal with it alone and nor should they.

“I as Archbishop for instance, can’t be making unilateral decisions about these matters without going to these other instrumentalities and working through it in that way,” he said.

“The days of us just in-house looking at these on our own are gone.”

He also said that he was petitioning with the ACT Government on reporting matters.

“There’s slightly different legislation in the ACT and we have been petitioning with the ACT Government to raise the bar on reportable conduct policies to be equated with NSW,” he said.

Writing a letter of consolation to the Church in the Archdiocese, Archbishop Prowse offered his support to those affected by the abuses.

“My Dear Brothers and Sisters in Christ, this is a most difficult time for you,” he said.

“As your shepherd, I wish to express and assure you of my solidarity with you and my prayers for you.

“Victims of child abuse by priests and religious have suffered enormously. Their wounds are deep and profound. Let us pray for them. In particular, may Jesus, the Divine Physician, heal them.”

In his letter, Archbishop Prowse offered as a prayer the passage of Scripture from 2 Corinthians 1:3-4.

He asked for Church members to support and care for their priests in a time of fragility and thanked those who had remained steadfast in the faith during difficult times.

In a recent address given at CatholicCare’s strategic plan launch, Archbishop Prowse said he had taken heart from the courage shown by victims of sex abuse.

“One of the great gifts of this troubling time is the emergence of victims and victim support groups,” he said.

“They have had the courage to articulate their grievances. I see them as real wounded healers who are moving from the margins into the centre of Church focus.”

He also spoke about trust issues which exist as a result of the offences.

“A question asked of religions today, and particularly Christian churches which includes the Catholic Church, is ‘can we trust you?’” he said.

“This question has been asked in the light of sex abuse of minors, and some personnel of the Church have clearly been found to be perpetrators of these atrocities.”

He assured people that measures were now put in place to ensure that the atrocities were a thing of the past.

Following four years of submissions before the Royal Commission, CEO of the Truth Justice and Healing Council, Francis Sullivan described all that had occurred as an “indictment”.

“We acknowledge that around 40 per cent of the Commission’s private sessions reveal claims of abuse within a Catholic institution,” he said.

“The data tells us that over the six decades from 1950 to 2010 some 1265 Catholic priests and religious were the subject of a child sexual abuse claim.”

Other figures to emerge from the Commission findings include that over the past 35 years, 4444 people have reported that they have been the victim of child sex abuse by clergy and religious.

The average time between an alleged abuse occurring and the reporting of it was 33 years; the average age of the child being abused was 10 ½ for boys and 11 ½ for girls.

“These numbers are shocking. They are tragic and they are indefensible,” Mr Sullivan said.

“It is a history that must be told and reckoned with.

“Even for one child to have been sexually abused by a Catholic priest or religious is as appalling to all faithful Catholics, as it is to all within our community.

“How the Catholic Church dealt with child sexual abuse is very much the concern and responsibility of today’s leadership.

“The hypocrisy involved in these historic failures is grossly unbefitting a Church which seeks to be, and should be, held to its own high standard.”

“Let us not forget that every person who has come forward carries with them the suffering, damage and loss, which child sexual abuse inevitably causes,” he said.

“They have borne the risk of further traumatisation in order to share their experiences.”

The recently released figures reveal to some degree the extent of the damage caused.

However it is widely accepted that it is highly likely there remains a number of victims who have not yet come forward.

Matt Casey, director of the Archdiocesan Institute for Professional Standards and Safeguarding, said the Church and its agencies had much better practices in place than in the period between 1950 and 2010.

“The recently released figures from the Royal Commission are shocking and shameful,” he said.

“Clergy were the subject of 60 per cent of allegations but the most significant perpetrator, a priest, accounted for 23 victims, nearly 30 per cent of the total.

“The steps Archbishop Prowse has taken including the establishment of the Institute for Professional Standards and Safeguarding, has placed the Archdiocese in a good position to benefit from the learnings of the Commission.

“He has placed victims at the centre of our efforts to address wickedness and harm that has been done.

“Importantly he has focused the local Church around a culture which, as Jesus Christ urged us, places the wellbeing of children and vulnerable people as a prime responsibility.

“Addressing the awful revelations of the Royal Commission is a responsibility for us all. Initiatives such as the Institute for Professional Standards and Safeguarding and its regular meetings with the Archbishop, Vicar General and heads of agencies enable lay people to have an immediate and authoritative presence in the formulation of policy around safeguarding and the response when issues arise.”

Archdiocesan Vicar General Fr Tony Percy was rector of Good Shepherd Seminary in Sydney between 2008 and 2015.

He said the process with which seminarians are now selected and assessed in their formation is much more stringent.

“If we are unsure about a seminarian, then we always resolve in favour of the Church community,” he said.

Fr Percy also encouraged a cultural shift in parishes calling for “co-responsibility” between the priest and parishioners, asking for “lay people to rise up”.

“There’s been an over-play of clergy and a lack of participation by lay people,” he said.

“They’ve (the priests) got spiritual authority, which they should have, and it’s important to have people who know something about the Spirit, but we’ve got to slowly change the culture.”

Last year, led by school principal Richard Sidorko, Marist College Canberra held a ‘Liturgy of Lament’ to say sorry to former students and their families who were victims of sexual abuse.

To read the Royal Commission transcript in full go to http://www.tjhcouncil.org.au/royal-commission/case-study-50-catholic-church-authorities,-february-2017,-sydney/case-study-50-transcripts.aspx

To read the Archbishop’s Letter of Consolation in full go to cgcatholic.org.au/