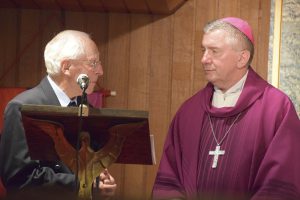 Formal Christian Brothers representation at Canberra’s St Edmund’s College ended, following the departure of Br Matt McKeon, as the last to teach and minister at the college.

Signifying a change of era, Br McKeon, 92, is moving on after 20 years.

He has been appointed to the order’s Brisbane chapter, due to a recent shuffling of personnel.

The College pulled out all stops recently to give a farewell of note, holding a Thanksgiving Mass in the school’s Blessed Sacrament Chapel for him and the Order.

Archbishop Christopher Prowse said he said he was delighted to offer the Mass and acknowledged the contribution of both Br McKeon and the Christian Brothers to Catholic education in Canberra.

Having recently been acknowledged for his work in the Archdiocesan Catholic Charismatic Renewal, Br McKeon’s positive influence on St Edmund’s, was highlighted in a student reflection from 2017 college captain Jack Dowling.

Archbishop Prowse described Jack’s reflection as an accurate description of the departing Christian Brother and attributed some other superlatives.

“I think the thing that stands out about Br Matt, is his humility,” Archbishop Prowse said.

“He has been a rock in the community.”

In his speech, Br Magee acknowledged that the time to move on was right.

“For the past 63 years many brothers have shared their lives and their expertise and energy on this very site.

“It has been their workplace, their home. Theirs has been a selfless and self-effacing service which in generosity, enthusiasm and courage they have been willingly involved.”

He thanked Br McKeon “who has served this college and many other educational establishments wholeheartedly for more than seventy years.

“I know he will find the parting sad, but I know that as a man of deep faith and fidelity he will respond to the new challenges of new places of living and ministry with characteristic generosity.”

Offering a reflection of his own, Br McKeon said he left with great memories.

He expressed his gratitude to the St Edmund’s community for all they had done for him and the brothers over the years.

He also spoke of the optimism which St Edmunds can look forward with.

“I know we the brothers leave this college in good hands,” he said.

Both were on hand to concelebrate Mass, while another Old Boy, Stephen Kirk provided the music.

Following Mass, refreshments and speeches were held in the College hall named after Bishop Power.

Michael Maloney delivered his talk which spoke about the early days in the College’s history and the characters that have been involved there at some stage, and the 147 brothers who have educated the boys since 1954.

Principal Daniel Lawler, said the college would aim to carry on the good works and standards left behind by the brothers.

“To honour their legacy and spirit, this remains the goal of St Edmund’s – a broad program that includes all and aims high, to enable boys to reach their God given potential through education,” he said.