Ending the Year of Mercy

It’s not too late to gain a plenary indulgence in this Extraordinary Jubilee Year of Mercy, which ends on November 20.

Last year, Pope Francis through his Papal Bull Misericordia Vultus, announced that there would be a Year of Mercy with the theme “Be merciful, as your heavenly father is merciful” (Lk 6:36). 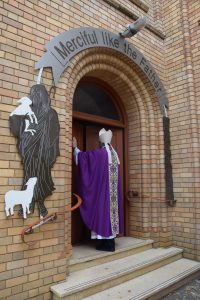 The Pontiff declared that the Church is “commissioned to announce the mercy of God, the beating heart of the Gospel” and he gave a reminder that “mercy will always be greater than any sin”.

When implementing the Year of Mercy, Pope Francis requested that a Holy Door be opened in the “mother church” of each diocese, so as to become a gateway of mercy.

He also declared that providing all other requirements have been met, a special plenary indulgence in this Year of Mercy is granted to those who pilgrimage through the Holy Door.

“The practice of pilgrimage has a special place in the Holy Year because it represents the journey each of us makes in this life,” Pope Francis wrote in Misericordia Vultus.

“To reach the Holy Door, each according to his or her ability will have to make a pilgrimage.

“May pilgrimage be an impetus to conversion: by crossing the threshold of the Holy Door, we will find strength to embrace God’s mercy.”

Archdiocese of Canberra and Goulburn

Archbishop Christopher Prowse is encouraging parishioners and pilgrims alike, to continue embracing the Year of Mercy.

“I encourage you all to respond to the Pope’s invitation for us to ‘experience the love of God’,” he said.

“This Year of Mercy is a one-off and I invite all the faithful to make use of the Holy Door at St Christopher’s Cathedral.”

What is an indulgence? 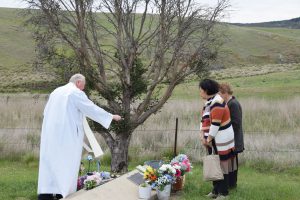 The doctrine and practice of indulgences in the Church are closely linked to the effects of the sacrament of Penance:

“An indulgence is a remission before God of the temporal punishment due to sins whose guilt has already been forgiven, which the faithful Christian who is duly disposed gains under certain prescribed conditions through the action of the Church which, as the minister of redemption, dispenses and applies with authority the treasury of the satisfactions of Christ and the saints.

“An indulgence is partial or plenary according as it removes either part or all of the temporal punishment due to sin.” – (Catechism of the Catholic Church, para 1471)

Requirements for obtaining a plenary indulgence

According to the Vatican’s Apostolic Penitentiary: The Gift of the Indulgence, a plenary indulgence can be gained only once a day. In order to obtain it, the faithful must, in addition to being in the state of grace:
• have the interior disposition of complete detachment from sin, even venial sin;
• have sacramentally confessed their sins;
• receive the Holy Eucharist (it is certainly better to receive it while participating in Holy Mass, but for the indulgence only Holy Communion is required);
• pray for the intentions of the Supreme Pontiff.

It is appropriate, but not necessary, that the sacramental Confession and especially Holy Communion and the prayer for the Pope’s intentions take place on the same day that the indulgenced work is performed; but it is sufficient that these sacred rites and prayers be carried out within several days (about 20) before or after the indulgenced act.

Year of Mercy Vigils to conclude
To conclude the Year of Mercy, the Catholic Charismatic Renewal group based in the Archdiocese will hold its final all-night vigil

As the priests of St Patrick’s Parish Cooma, Fr Mick MacAndrew and Fr George Inalegwu Ogah prepare the faithful for receiving the Sacraments. 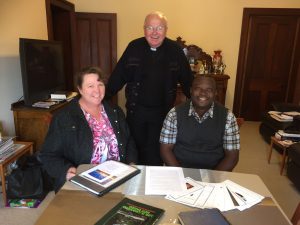 Top: Fr MacAndrew and Fr Ogah assist parishioner Sharon Nesbitt at the funeral seminar which they held in the parish. Picture: Contributed. Above: Fr MacAndrew blessing the graves at the Delegate cemetery recently. Picture: John McLaurin.

Like their brother priests and deacons, they also pray for and bury the dead.

As priests they are often left with lasting memories from invitations by families to attend the dying and to administer the anointing of the sick and last rites.

They are also called on by families who have had a member die.

In this instance, funeral directors are called in to collect the body and to arrange the funeral at a practical level.

Despite having seminary training to deal with grief and loss, the priest often has a profound influence on the life of a dying person and their family.

Helping families prepare for funerals spiritually is something else which comes with the territory.

By praying for the deceased, the priest sets an example in encouraging the family to turn to God in their time of loss.

At a recent seminar in his parish on funerals, Fr MacAndrew reiterated some of the reasons for having a Catholic funeral as a means of praying for the dead.

“A funeral is a commendation of the deceased to the love and mercy of God,” he said. “It is a gathering, a liturgy, a public service of worshipping God, the author of life.”

“There are commonly three parts or types of rituals involved in a Catholic funeral – a vigil or wake, a Mass, and the burial,” he said.

“A Catholic funeral offers worship, praise and thanksgiving to God, the creator of all life; it commends the deceased person to God’s merciful love; it affirms the bonds between the living and the dead in the communion of saints; it brings hope and consolation to the bereaved; it celebrates Christ’s Passover and our participation in it through Christian initiation.”

While the funeral is the ultimate expression in praying for one’s soul as a community, there is also a ritual of prayers at the burial which complete the process.

Just before the actual burial, a priest generally officiates at a short ceremony at the graveside, leading prayers and blessing the grave and coffin with holy water that has been sanctified by a priest or a bishop.

Corporal Works of Mercy
7a: To Bury the Dead

This corporal work of mercy is not part of the Parable of the Last Judgement like the other six. It is taken from the Old Testament (Sir 7.33). While at first glance it would seem slightly out of place with the others, which focus on achieving focused goods for those who will benefit from our activities, in another sense, this is the key to the understanding of all of the works of mercy. Burying the dead is a demonstration of the centrality of the concept of human dignity. As beings that are both spiritual and physical, it has been all too easy in human history to assume the spiritual is opposed to the physical – this thinking is foreign to Christianity.

Among the key mysteries of the Christian faith is that God graciously creates the physical universe; later, God enters into the creation in a fundamental way, in the Incarnation – Jesus is God become Human. In this act, God has dispelled any sense that the Spiritual is superior or that the physical is not in and of itself holy.

For Catholics, the strong sense of sacramentality is another level of recognition that the physical realm, especially the human body is fundamentally sacred. We name, ‘wash’ and anoint bodies to welcome them into the community; we anoint them for service and particular roles in the Church; we celebrate our faith in a ritual meal of food and drink.

Burying the Dead is an extension of the same sacramental principle – the dignity of the human person endures beyond death – just as we honour and care for the body when alive, we show honour to the body of the person now deceased.

The honour paid to the physical remains of a person is not just reminiscence or related to the memory of the person, they are recognition of the importance of the physical dimensions of human existence. As this is an expression of the dignity of the human person, so too the obligation to feed, give shelter, quench thirst, clothe, care for the sick and imprisoned.

The call here is not for us all to become undertakers or funeral celebrants. It is about paying respects to the deceased and beyond that to care for those who are grieving.

Compassion, meaning to walk with another and to share their burden, is a significant demand on Christians and on all those who seek to follow Christ. The Corporal Works of Mercy are practical examples of compassion – understanding the plight of another and genuinely seeking to assist them. Together with the work of caring there is also the fact that these obligations involve each of us questioning the circumstances that give rise to the plight of the other. In expressing our commitment to the dignity of the person through ‘burying the dead’ we are recognising how it is only within a community that we can become genuinely human.

Spiritual Works of Mercy
7b: To Pray for the Living and the Dead
As with the other Spiritual Works of Mercy, the obligation to pray for others is the reflective dimension of ‘de-centring’ ourselves. It is recognition that no conversation is ‘all about me’. Instead being part of the human community is about sharing our lives and our concerns with each other in order to build our community.

Communities, as understood in the Christian tradition, are not just social entities or collections of people based on geography, ethnicity or religion. They are relationships between persons which involve mutual obligation. When I share part of myself with another, I am sharing something unique and precious. That sharing needs to be regarded with dignity; it also invites reciprocal sharing.

Relational communities are built through these instances of reciprocal sharing and the mutual obligations that arise from knowing things about another. Linked to this is the call for believers to pray for those within their communities.

Initially such prayer – a de-centring of myself and my concerns to focus on the needs of another are limited to those with whom I am in close relationship – many children are encouraged to ‘pray for…’ members of their families or for neighbours or those we know who are sick or in some special need. This is teaching that the needs of others are important not just to them but to each of us. Praying for these known others is one way of demonstrating our relationships.

Of course, as we grow and recognise our universal obligations, so to praying for others becomes more universal extending to those other members of the human community that I may not know or cannot know. Due to our understanding of the bonds between persons and the innate dignity of the human person, prayer is equally valid for those who have died.

Praying for the Living and the Dead is both seeking the intervention of the Divine for the needs of others, but maybe more deeply it is an expression of our obligations to each other built on our intrinsic relationships with other persons.