Farewell to the Josephites 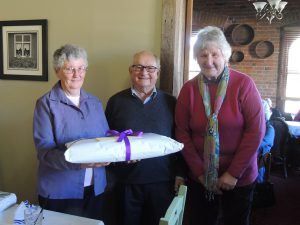 ADELONG’S last resident Josephite, Sr Carmel Piffero, is confident parishioners will continue to build on the good work of the Sisters over the past 133 years.

Nine Sisters from Sydney and Goulburn, along with three priests, joined Sr Carmel and parishioners for the parish’s farewell Mass and luncheon of the Sisters of St Joseph, which was attended by about 60 people

Sr Mary Ellen O’Donoghue presented the parish with a painting of a young St Mary MacKillop and Fr Julian Tenison Woods, founders of the Order.

Tumut Parish Priest, Fr Sijo Jose and former Gundagai Parish Priest, Fr Bernie Hennessy, both spoke of their association with Sr Carmel, while Elizabeth Murray, on behalf of the parish, acknowledged her and the Order.

“We thank Sr Carmel and those Sisters who have been here, for their contribution to the education of the children and the running of our parish of St James over the last 133 years,” she said.

The Sisters of St Joseph first came to the gold-rush town in 1884, two years after the founding of their community at North Goulburn.

Four Sisters came to Adelong in a horse and sulky without any illusions as to what they faced, starting off in the humblest of circumstances.

They lived in a small slab cottage at the rear of St James church (1862) and taught in a wooden building attached to the side of the stone church.

Their presence brought education, music and spirituality to the community.

Long-time parishioner Bob Isaac recalled some early memories to the delight of the visiting Sisters.

The parish has produced Josephite Sisters of its own, with Sr Mary Agnes Leslie joining at Goulburn in 1889.

Sr Ann Steenbergen was the last religious principal of the school in 1985, ending just over 100 years of the Sisters administration.

Sr Carmel was one of the last Sisters to teach there in the mid-1980s and she returned to Adelong as parish co-ordinator in 2009.

She will now take up a position at the Sisters spirituality and retreat house at Batehaven on the South Coast.