These Fisher-men are chasing footy contracts

THEY share the same name and they are both chasing AFL contracts. 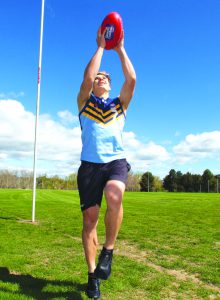 Fisher, 18, is one of a number of AFL hopefuls this year desperate for a chance to play in the nation’s elite competition.

As a midfielder and half forward, Fisher is responsible for initially winning the ball and then providing the forwards with plenty of supply.

He lists his decision making and skills as his greatest attributes and comes from good stock: paternal grandfather Ken Duff was a Geelong Cats footballer.

The former Ainslie Tri-Colours youngster and Marist College student hasn’t stopped training since playing his last game in September at a time when most players rest weary muscles and limbs.

This year has been a gap year so he can concentrate on his football and it’s a decision he hopes pays dividends come the AFL draft on November 25.

This season he has played “just about all over the place” while representing a host of teams.

Behind the scenes he has been working as a barista at a café in Garran.

As a NSW/ACT product he has taken to the intensity of state league in 2016 playing against much bigger-bodied men.

He has lined-up for both the University of Western Sydney Giants and the Canberra Demons strutting his stuff in the North Eastern Australian Football League (NEAFL).

The pinnacle of his season was being selected to play in division one and two of the National Under-18 Championships.

His performances during the championships for the NSW/ACT Rams in division two warranted selection in the Allies team which competed in division one.

With potential football careers up for grabs, the championships are really telling when it comes to the reputations of AFL aspirants.

Fortunately for Fisher he had a good carnival and was noticed by a number of the clubs, something which puts him right up there with a fighting chance. He was invited to the AFL Draft Combine which took place at Etihad Stadium in the first week of October.

To attend the AFL Draft Combine a potential draftee has to have been nominated by a minimum of five clubs. The combine tests a player’s fitness level, character and mental strength Each player is put through their paces and also grilled by the recruiters, who are looking to identify potential strengths and weaknesses in the overall make-up of the player.

“Overall I was happy with the way I performed at the championships, and to play well against some really elite players means that I’ve put my best foot forward,” the left-footer said.
Whether he is drafted or not, Fisher will seek to study in the sports science field from next year. This will be in addition to playing state league football, in whichever part of the country that may take him to.

It means that he can’t afford to get too far ahead of himself when it comes to making plans for next year. “We will just have to wait and see what plays out at the draft before making too many plans,” he said. “The clubs are very tight-lipped when it comes to giving anything away. It really is a lottery.”

Should Fisher not get drafted to a senior list on November 25, then he does have a second chance to make the big time with the pre-season and rookie draft.

The pre-season and rookie draft is being held on November 29, the difference being that there is less career security for a player drafted as a rookie.

Being drafted to the senior list ensures an initial two-year contract, whereas a rookie is offered a one-year contract.

For Fisher it’s now a waiting game and an act of faith.