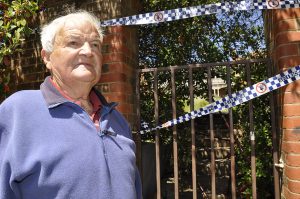 Michael Smereczanski peered through the gates of the former St John’s Orphanage recently.

In being he was a world away from his childhood, but not in mind.

Memories resurfaced amid a tinge of sadness about the building’s destruction through vandalism and fire.

“At first I felt sorry but it’s been gone so long,” he said.

”It’s an eyesore. History is history and you have to let it go. I’d like to see it demolished. It’s just memories now but they don’t go on forever. You’ve got to go ahead.”

Mr Smereczanski was in his early teens when he came to St John’s. His family, including four brothers and four sisters, had fled Poland during the German and Russian invasion in World War Two. They made their way to Italy as “displaced persons” before sailing on the General Black to Australia in the late 1940s.

After six months at Bonegilla migrant camp in Benalla, the family came to Goulburn. By that time Mr Smereczanski’s sister was working at Kenmore.

“We got straight off the train and went into the home (St John’s). It was hard for us because we couldn’t even speak English,” he said.

Michael and brothers Billy and Adam went to St John’s while their sister, Irena, was sent to St Joseph’s Girls Orphanage on Taralga Road. He could never quite understand why.

“We were displaced people and no one was too happy about it (going to the home) because we had been separated during the war,” he said.

Mr Smereczanski’s father worked at Metropolitan Portland Cement at Marulan and his mother at Kenmore Hospital. The children made the best of their lot.

He said St John’s was a good home but with ups and downs. He ran away several times but police brought him back to a stern reprimand.

But there were good times. Mr Smereczanski remembered the kindness of visiting Catholic priests who took them on excursions. Fr Hasler, “a damned good bloke”, played the piano in church. The Sisters of Mercy, who ran the orphanage, extended a special brand of care. He fondly remembered helping out in the large kitchen, peeling potatoes, making porridge and cleaning up. The orphanage also had a “beautiful church and artwork”.

“I played indoor soccer, milked cows and picked up bread from the bakery off Mundy Street. We had fun,” Mr Smereczanski said.

He was the first of his brothers to leave St John’s. He worked at Goodlands Store, then Haslers milk bar before going to work at the late Ron Brewer’s Marulan district property, Green Hills.

Mr Smereczanski was philosophical after surveying the old orphanage’s wreckage.

“Every time I look at it I think why leave it standing? It could be used for a better benefit for Goulburn,” he said.

But former resident Phil Merrigan is angry about the fires. He attended the institution in the 1960s, has organised reunions for many years and managed an old boys’ website.

“We expected it but we’re frustrated with the council. If you park in the wrong spot, you get fined. There are fines for all sorts of things, yet they allow a heritage building to become derelict and nothing happens. I can’t get my head around that.”

Mr Merrigan said he had fielded many calls and emails from old boys. One was so upset he couldn’t speak.

The remains of the chapel on the western side reminded Mr Merrigan of a tombstone but he noted the structure’s defiance.

“The old boys feel it is scarred and burnt, it tried to put up a fight, but now it should be demolished. Their last link to Goulburn is gone,” he said.