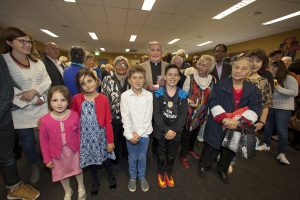 After 56 years serving parishes in the Archdiocese, he recently celebrated his final Mass as parish priest at St Joseph’s, O’Connor.

The church was at full on the day with a large contingent of friends, family and parishioners, past and present, attending.

Several parishioners from Fr Kennedy’s former parish at Kambah came to the Mass and were keen to pass on their gratitude.

In his homily, Fr Kennedy discussed his time as a priest in the Archdiocese.

He told the story of how he is the great grand-nephew of Bishop William Lanigan, Goulburn’s first bishop.

He spoke about his time at O’Connor and thanked parishioners for their ongoing support.

Fr Kennedy recalled the 2007 fire in the church, which happened on the feast day of St Mother Mary of the Cross MacKillop, August 8.

A photograph of the saint survived intact, despite being at the epicentre of the fire.

He acknowledged 19 years he spent in establishing and nurturing St Thomas the Apostle Parish, Kambah.

After Mass, Fr Kennedy mingled over morning tea with parishioners.

Parishioner Anne Rosewarne said Fr Kennedy’s retirement was a loss to the parish, and she wished him well for the next stage of his life.

“We will certainly miss Fr Kennedy, but he has earned his time of rest and we wish him a happy and long retirement,” she said.

“We hope that he can do some of the things that he wants to do.”

No longer being a parish priest does not mean Fr Kennedy will be idle.

“I am still the chaplain at Clare Holland House as well as the Canberra Serra Club and next year I will be working in the new Archdiocesan archives section at Manuka, but it’s good to be retired,” he said.