Fr Bill ready to swap the bush for the city

CHANGE is in the air out at St Clement’s Retreat and Conference Centre in Galong.

After three years in charge, Fr Bill Goldman is being transferred to the Redemptorists’ Brighton publishing house in Melbourne’s south-east, effective from February.

There he will take up a position of protocol officer for the Redemptorist Fathers and Brothers in Australia, meaning that he will leave the bush retreat for the city lights. 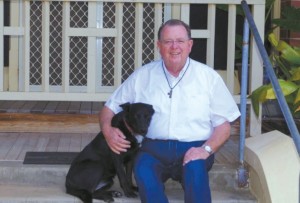 Originally from Armidale in country New South Wales, Fr Bill said he would miss the serenity Galong offers, but that he would remain connected to the famous retreat centre.

“I have loved being at Galong and enjoying a piece of the bush, so I will find the move challenging,” he said recently.

“I am not altogether severing my connections with St Clement’s, as I will still be on the board and remain involved with the farming side of things.”

Fr John Airey from Auckland will arrive in February to replace Fr Bill as rector, and he will be assisted by Fr Pat O’Neill.