The Archdiocese has taken steps to be more courageous in its pastoral care of people, by inviting Fr Philip Bochanski, the international associate director from Courage International, to talk with archdiocesan staff.

Courage International is a world-wide Roman Catholic apostolate formed in 1980 to provide pastoral care and support for people with same-sex attraction who want to live chaste lives.

EnCourage, the sister group of Courage, began in 1992 to assist parents and friends to maintain their faith in the Church’s teachings, while supporting their loved ones. 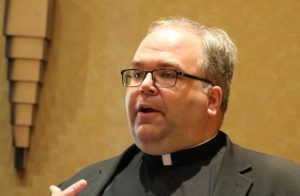 Based in Norwalk, Connecticut (about an hour’s drive north of New York City), Fr Bochanski was in Australia for a national tour, including visits to Courage and EnCourage chapters in Melbourne, Sydney and Brisbane.

It also including discussions on starting chapters in the Archdioceses of Canberra and Goulburn and Hobart.

Vicar General Fr Tony Percy, who welcomed Fr Bochanski to the Archdiocese, said his visit was a “very timely one”.

Deacon Don Nguyen, who was recently asked by Archbishop Christopher Prowse to work as a chaplain for Courage and EnCourage in the Archdiocese, also attended the gathering.

Fr Bochanski showed members of the Archdiocesan media and communications team Desire of the Everlasting Hills, a documentary film in which three Courage members tell their stories. It can be viewed online at www.everlastinghills.org

He was philosophical about steps which need to be taken in order to address the issue.

“First of all we must be careful about the language we use,” Fr Bochanski said.

“The Church urges us not to reduce our understanding of the human person to just their experience of sexual attraction.

“We should not label people as gay or lesbian as if their labels define their identity or make them a different kind of category of person.

“Instead, we speak of people who experience same-sex attractions.

“We must begin by welcoming each person in the name of Jesus Christ, making it clear that there is a place for them in the Church.

“This is what Pope Francis means when he said we should accompany people starting from their situation.

“Once that initial welcome has been extended, the Church should share with each person the good news that living chastely sets one free to love authentically, and to enjoy real friendship, affection and charity.

Fr Bochanski highlighted the witness of clergy and religious celibacy in their vocations, which can encourage others to experience the joy of chaste living.

He said local chapters of Courage and Encourage would be a blessing for people in the Archdiocese and he was committed to helping new groups get established.

For information on starting a chapter of Courage or EnCourage, contact Deacon Don Nguyen at Courage4lives@gmail.com