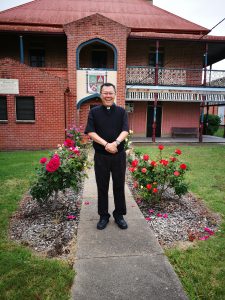 “MICHAEL, if you are still able to walk, it is worthwhile to spend your time gainfully on pilgrimages during your annual leave,” Weston Creek Parish Priest, Fr Kevin Brannelly said to Fr Lim, not long after the latter was ordained.

Since then here has been no looking back for the current parish priest of Bega.

After listening to the words of Fr Brannelly, he has now clocked up seven pilgrimages to the Holy Land, Italy, Eastern Europe, France, Spain, Portugal and Eden on the Far South Coast of NSW.

Fr Lim described his recent centenary year visit to Fatima with 48 others as a “spiritual gourmet of a pilgrimage, complete with an appetizer, a main course and dessert.”

He says that the message of Fatima is different from the previous Marian apparitions due to its sense of urgency. However he believes that focusing too much on the Apocalyptic nature of Fatima is to miss the essence of the message. Catholic Voice takes a closer look at his experience.

The Appetizer:
“Before our arrival at Fatima, we completed a preparation journey from: Paris Rue De Bac – Shrine of St Catherine Laboure of the Miraculous medal; Lisieux – ‘Les Buisonnets’ of St Therese ‘the Little Flower’; Mont St Michel Island in Normandy; the ‘Incorruptible’ body of St Bernadette in Nevers; Paray-Le-Monial- cradle of the Sacred Heart of Jesus where our Lord appeared to St Margaret Mary Alacoque; Ars- the patron saint of parish priest; St John Marie Vianney and up the French Alps of La Salette and the healing Sanctuary of Lourdes in Southern France.”

The Main Course: Fatima
“One of my elderly parishioners said, ‘never in my wildest dream would I thought I would have witnessed the collapse of the Berlin Wall and the demise of the Soviet Union as well as the conversion of Russia to its Christian faith again’. With these happenings one can’t help but marvel at our faith. The Lord is also Lord of human history that unfolds before our eyes. The message of Fatima is different from the previous Marian apparitions. The message of Fatima calls for our spiritual charity through Consecration to the Immaculate Heart of Mary, Rosaries and penance for the conversion of hardened sinners. Many in the group went down on their knees in the Apparition Chapel in the Sanctuary at Fatima.”

Dessert: ‘Extended families’
“To many it was a spiritual awakening of our faith and of the Catholic Church. One’s faith is never the same again after participating in a pilgrimage. Some pilgrims came alone or with family members and all left with an ‘extended family’. These new found family members, who we never knew before the pilgrimage, had always been there within the Catholic Church (Catholic means universal).”