Goodness corrupted in the name of entertainment

I RANG home last week on my way to the cinema to say I was seeing the new Batman v Superman movie, only to hear my siblings screech, “DON’T DO IT”. This seems dramatic until you read reviews of the movie, which are fuelled with spluttering rage.

People are angry that this so-called ‘superhero’ movie severely deviates from the traditional prescription of such a tale.

Superhero plots usually explore the clear positions of good and evil. They give people something to hope for and something good to cling to. This one, however, was muddy and dark, giving little promise that our hero was going to take care of us. Every character felt partly corrupt, and the plot seemed to feed on lies and distrust.

The film didn’t fill me with the same patriotic rage as the hardcore comic fans experienced, but I still felt betrayed in being served a pseudo-superhero plot. Heaviness was stitched into all levels of society, with deception in the governments, the heroes not trusting each other and the personal integrity of our characters being called into question. Quite seriously, everything felt like it was tainted, and it was hard to know who to side with. I know they were trying to be edgy and entertaining, but this pervasive negativity felt toxic, reflecting a worrying part of our reality.

It may seem trivial, but in fact moving away from the traditional plot for such darkness seems worse when you understand what negativity does to the brain. The human brain retains negative information (sounds, memories, thoughts and feelings) far easier than their positive counterpart. Our emotion centre, the amygdala, codes and remembers the negative emotion of fear more vividly than any other emotional experience. I bet you can recall the teasing comments from past years quicker than the affirmations. 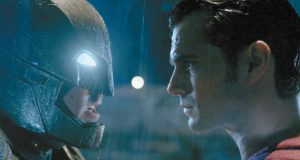 The Batman v Superman: Dawn of Justice film is a tale of darkness, distrust and unforgiveness. PHOTO: ONLINE

Considering its neurological strength, acknowledging the toxic levels of negative stimulus surrounding us is confronting. Just consider modern news, music and humour – we didn’t need our superhero plot infected too.

Christian researcher Dr Caroline Leaf has a PhD in Neuropsychology, and teaches on the toxicity of negative thoughts. She explains that a high percentage of our illnesses develop from our ‘thought life’, with fear being a huge contributor. Our thoughts affect us physically and emotionally, and yet we subject ourselves with toxic fuel for the fire.

In this respect, the film does us no favours. Our ‘superheroes’ are holding grudges towards each other, and the hatred coming from the villain is overwhelming. Forgiveness isn’t mentioned and the film’s general pathetic attitude is summed up by the quote, “No one stays good in this world”. I’d rather not internalise that belief, thank you!

If negative thoughts and experiences have this much influence over us, I ask myself what I’m doing watching a film that dropped the empowering superhero tale to corrupt goodness in the name of entertainment.

I think it’s still worth watching the Batman v Superman film, as the special effects are great and it’s genuinely entertaining, but I do believe the director made some essential mistakes. We are in a time when being good is hard, and being a Catholic is harder. In trying to evolve and develop a new flavour, they robbed us of one thing we need most – goodness and a winning team to hold on to.