Hartwells named family of the year

Brett and Anne Hartwell gave credit to the fine example of “endurance and perseverance in marriage” set by their parents when they and their four boys were named ACT Family of the Year. 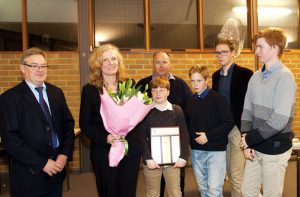 “Brett and I are blessed to have both sets of our parents to support us,” Anne said.

“We have dinner together each week with both sets of extended family, and the boys thoroughly enjoy spending time with their grandparents.

“It is a time for creating precious and lasting memories as well as showing each other how to live a good and full life.”

In making the announcement at the Australian Family Association annual meeting, president Paul Monagle said the family was “an inspiration and worthy winner of the award”.

“Anne and Brett Hartwell have not only worked hard at rearing their own four boys in line with Christian principles, but they also make a significant contribution to many groups.”

Brett and Anne acknowledged the foundations and values with which their family operates.

“Compromise is important in a strong marriage; it’s not about being selfish, but being for the other,” Brett said.

Anne agreed, saying that the “daily decision to love is vital” and that both she and Brett are “totally committed to the vows they made to each other almost 20 years ago.

“Marriage is a challenge but it is the foundation which our society is built on and we need to show our children how important lasting commitment is.”
The family is well known for the efforts in their parish and with Marist College.