Homeless helped to a clean start 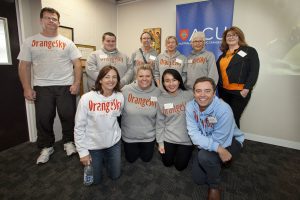 OFTEN when we think about charities, we imagine organisations that feed, house, educate and clothe the poor. But what about one that washes and dries the clothes of the homeless?

The service, which began in 2014, has joined forces with a national education partner, Australian Catholic University.

Three years ago two men had the crazy, not-crazy, idea to put two washing machines and two dryers in a van to wash and dry clothes for the homeless at no cost.

The deal with ACU was signed at Deakin offices of the St Vincent De Paul Society, involving another large national charity provider.

The partnership between Orange Sky and ACU is designed for both to deepen their ties with the community and to extend their interaction with them.

Full story on Catholic Voice Newspaper.  Grab your copy at the mass or download here.