HUNDREDS prayed the Queensland Government would continue to uphold a child’s right to live during the first pro-life march through Brisbane on March 5.

More than 400 people, including Catholic supporters, converged for the first ‘March for Life’ through Brisbane city in a silent protest against abortion.

The march took the pro-life message from Queens Park to Parliament House in an effort to voice opposition to legalising abortion, which is still a crime in Queensland.

Catholic pro-life woman Anne- Marie McClarty was among the hundreds praying for thousands of women who might walk through an abortion clinic this year.

“I think it was a prayerful presence,” she said. “Somehow people’s hearts were being touched.” 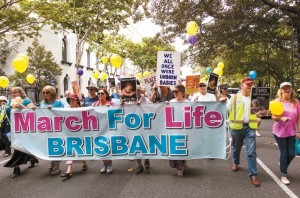 “That abuse is saying that killing is the solution to social problems,” he said.

“Once you’ve voted on this issue, you must, must, must talk to every elective representative in every body, anyone who represents you in any parliament, that this is why you either are voting for them or against them,” he said. “If every pro-life person in the whole community did this we would have a tidal wave of change.”

“Our country is suffering from a deep moral confusion and we each have a choice to make,” she said.

“We have a clear obligation to oppose it.”

March for Life Brisbane will be an annual event held in March.

* This article first appeared in The Catholic Leader and is republished with permission.