An invitation to enter ‘pools of silence’ 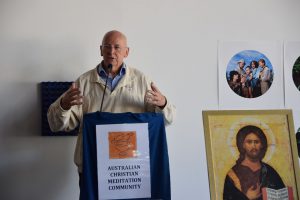 The Archdiocese’s ‘Pools of Silence in this Thirsty Land’ Christian meditation DVD which includes a contribution from Archbishop Christopher Prowse, will be made available after Easter.

Also helping revive the use of Christian meditation was Fr Laurence Freeman OSB on his second visit to the Archdiocese.

Based in London, he is the spiritual director for the World Community for Christian Meditation.

He believes that “meditation is the prayer of the heart and is the missing contemplative dimension of much Christian life today.”

Fr Freeman addresses many practicalities of Christian meditation in the DVD, something which he describes as “simple, but not easy.

“The best way to learn to meditate is to do it.

“The real work of meditation is to let go of your thoughts.”

Some of the main areas he covers include posture, alertness and relaxation as well as the need for developing a mantra word, such as Abba or Maranatha.

He also suggests that Christian meditation can be done alone, or with a group, referring to Scripture, “where two or three are gathered in my name, there am I among them” (Matt 18:20).

Fr Freeman led the most recent Archdiocesan clergy retreat at Galong and also gave a talk at the Australian Centre for Christianity and Culture in Barton, highlighting Christian meditation’s ecumenical dimension.

As principal host of the DVD, Archbishop Prowse says Christian meditation’s origins go back to the early days of the Church.

He also speaks about its benefits of Christian meditation.

“In Christian meditation we are actually allowing Jesus to speak in us, in our heart,” he says.

“I want to encourage it as much as I possibly can.

“Let’s go ahead now and practically start to think about how in our personal lives, and how also in our parish lives and communities, that we can bring a contemplative dimension into our faith.

“How can we in our parishes bring a deeper contemplative dimension?

“How in our workplace, in our families, marriages, in our communities whatever they are, to dig deep, to find the deep pools of communion with Jesus in this thirsty land of ours?

“This is our hope and is part of our mission, this deep drinking from the streams of living water, bringing peace to the world because that makes us more peaceful, that make us peaceful people and we pray in the heart of Jesus.

“So let that be our mission now, let that be a particular focus in the times ahead, so that we can truly say, not only set pools of deep silence in this thirsty place, but Lord Jesus start with me, start with us.”

He says people are sometimes surprised to learn that meditation belongs in the Catholic tradition.

One such person is Helen Bramanathan, a teacher at Thomas More Primary School in Campbell ACT, who speaks in the DVD about her Christian meditation experiences.

Initially she started meditating in the Buddhist tradition and was unaware about Christian meditation.

“When I found out that meditation was part of the Catholic tradition, I was really awestruck,” she says.

“I felt like my (Christian) meditation was a coming home.”

Mrs Bramanathan believes that her Catholic faith has been strengthened by Christian meditation and that other areas of her prayer life have benefited from it.

She adopted Christian meditation in her classroom after learning it was being used in Queensland.

“I decided that maybe I should give the children in my class this opportunity to pray in this way, to feel that they could just sit and be with God,” she says.

“To be honest I didn’t really know at first whether they really could do it. I did have doubts, but I realised that they’re quite natural at it, they’re amazing.”

Francis and Susan Sullivan have been active in the Canberra Christian meditation scene for the best part of a decade, give their testimony on the DVD.

They focus on Christian meditation as a couple in marriage and family life and speak about how integral it is for them each day to meditate for half an hour in the morning and half an hour before dinner.

“You just have to manage to find the time,” Mrs Sullivan says.

The Pools of Silence in this Thirsty Land DVD will sell for $18.

To pre-order go to www.faithresources.org.au

For more information about Christian meditation in the ACT, contact Susan or Rod Page on (02) 6281 2378 or by email act@christianmeditationaustralia.org