Jeffrey Dutton: My experience of Fatima 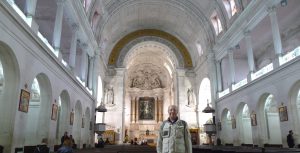 Jeffrey Dutton from Mary Help of Christians Pearce Parish, ACT, visited Fatima, Portugal in May 2013. Ahead of the 100th anniversary of the apparitions this month, he shares the experience of his pilgrimage.

The field in which the apparitions occurred is now a vast concrete concourse with basilicas at either end. At one end of the concourse is the ornate Basilica of Our Lady of the Rosary, containing the tombs of the seers.

During one apparition the Virgin Mary said to the children, “I am Our Lady of the Rosary.”

At the other end of the concourse is the modernistic Basilica of the Holy Trinity with its huge subterranean space seating about 9000 people.

Apart from the altar statuaries and a wall of golden mosaic, it is plain yet beautiful in its clean lines and austerity.

Towards the middle of the concourse, on the site where the apparitions took place, is the glass-walled Chapel of the Apparitions.

One can look out upon the tree where the Virgin Mary appeared.

The Rosary was constantly being prayed in the chapel when I was there, while pilgrims silently came and went.

The atmosphere of faith in this chapel was profound; a place of devotion; probably no better place to ponder the events which took place here.

Next to the chapel is an area for burning candles. Many were lit. I lit mine too, as a symbol and offering of continuing prayer.

Our Lady of Fatima requested prayer, repentance and consecration for world peace, in particular for the conversion of Russia.

There were some puzzling and challenging aspects of her message too, such as the secrets.

At first the children were disbelieved and scorned when they reported the initial apparitions, but nothing could dissuade them from their story.

Neither threats of imprisonment, nor threats of torture, nor bribes of riches could persuade the children to retract or alter details of their mystical encounters.

Soon crowds began to follow them to the monthly apparitions.

The commerce of the town of Fatima does not intrude into the religious precinct. It is a short walk to the shops and restaurants.

At a souvenir shop I bought a set of the seers, ceramic figurines of Jacinta, Francisco and Lucia.

It is intriguing that it is nearly always the humble, poor, uneducated and young to whom the Virgin Mary appears, such as the seers of Fatima, the seers of La Salette, and Bernadette of Lourdes.

The latter was asked why the Virgin would appear to such an unlikely person as herself.

With savant-like humility Bernadette replied: “Because I was the most ignorant person she could find. If there was someone more ignorant than me, she would have chosen her.”

At Fatima the seer, Lucia, said a light came from Our Lady’s hands which penetrated their hearts and made them fall on their knees and say, “Most Holy Trinity, I adore you.”

It was relatively quiet when I visited, perhaps hundreds of pilgrims, but not crowded.

I think my pilgrimage was enhanced by having delved a little into the phenomenon of the Fatima apparitions before I left Australia.

I could imagine the place as it once was, simply an earthen field with trees and shrubs, the three children inwardly called to a particular tree, a crowd following them in anticipation, all witnessing the rustling leaves which signalled the approach of Our Lady of the Rosary.