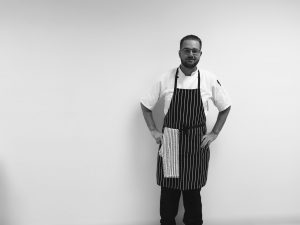 Processed with VSCO with b1 preset

ST CHRISTOPHER’S Cathedral is like a second home for school leaver, John-Paul Romano.
Having grown up in a devout Italian family under the shade of the Franklin Street trees, he is regularly seen around the place, most notably each Sunday when serving at the 11am Mass.
And he is now an ‘Old Boy’ of St Edmund’s after having spent the past eight-and-a-half years at the College in Griffith.
If you haven’t seen him on the Cathedral Sanctuary during Mass then maybe he has cooked one of your meals.
Mr Romano is currently in his third and final year of his apprenticeship as a chef at ‘1or2 Café’ in Manuka, where he nominates the ‘Turkey Club Sandwich’ as his favourite dish.
He has a business portfolio as well as European experience and this year says he is open to exploring new possibilities.
Apart from being kept busy as a chef-in-training, he is also undertaking two online university courses – one in Commerce and the other in National Security.
A passionate Canberran, the 18 year-old says he is still coming to terms with life outside the confines of the high school classroom but adds that he is hoping to open his own business and start a charity in the near future.
“I am discovering more and more the realities of adult life and 2018 is a year to grow my knowledge,” he said.
“I hope while studying, working and volunteering this year I can impart some of my knowledge on others while gaining multitudes of knowledge from them.”
As a long-time acolyte and Extraordinary Minister of Holy Communion, Mr Romano has an obvious affection for Mass and the Liturgy.
He hasn’t dismissed the idea of becoming a priest one day, but at this stage his future lies in politics.
“I see a career advocating for the voiceless, as my father and grandparents have done through the legal field,” he said.
“Supporting those who cannot support themselves and caring for the fringes of society.
“I see an opportunity to get people back up on their feet and I believe the most effective way of influencing change is politics.”
And for those who are wondering, yes, Mr Romano is named after Pope St John Paul II the Great.