Laying down our weapons for Christmas

IN mid-November, as the dust from the Paris attacks settled, the ghastly truth was uncovered. The details and death count shocked the world, striking those affected by the trauma and watching around the globe with grief and fear. The incidents in Paris were part of multiple terror attacks performed that week.

Seen often in the face of suffering is the quite remarkable concept of strangers joining together despite their differences, in the name of solidarity. The Paris events hold many such stories while the whole city grieved as one. People of all faiths, backgrounds, and ages gave their support freely to show that peace trumps violence.

A video went viral of a Muslim man who blindfolded himself on the Parisian streets only days after the attacks. He had a sign asking for hugs as a display of unity. After some initial hesitation in the crowd, the people overcame their worry and embraced the man fully. He risked criticism, and the onlookers put aside their pain for bridging peace.

The rest of the world also responded in solidarity to the disaster with support and prayers. Facebook became awash with red, white and blue flags as profile pictures; while Twitter users heavily embraced the hashtags #PrayForParis and #JeSuisParis to show support. Monuments around the world wore the French flag in coloured light, including the Sydney Opera House, Rio de Janeiro’s Christ the Redeemer, the One World New York Trade Centre and even our very own Black Mountain Telstra Tower. 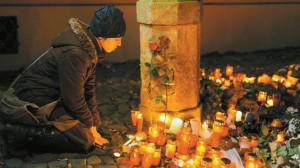 A young woman pays her respects during a memorial service held in Prague for the victims of the Paris attacks. PHOTO: FLICKR

We have seen the same level of support following local disasters in the past. The Victorian Black Saturday bushfires (2009), the Queensland floods (2010-2011) and the Lindt Café hostage crisis in Martin Place (2014) immediately spring to mind. People from all corners united in their grief and their support for the victims – evidence that something beautiful can come from heartbreak, and unity can be found in chaos.

In the lead up to Christmas, we can get so caught up with creating our own experiences, we forget to embrace the true essence of the season. Australians spend $4.5 billion each year just on pre-Christmas sales, and it feels like the focus has turned to delivering the perfect Jamie Oliver lunch. Instead of being a time for unity, it is both stressful and painful.

Christmas honours a young girl who received the scary news that she was pregnant in unbelievable circumstances. She was criticised, endured a rough journey on the back of a dusty animal at full-term pregnancy and had to place her precious newborn in a feeding trough for animals. Then, fleeing death from a bloodthirsty man, the new family became refugees seeking safety.

Nothing about the birth of Jesus was comfortable or perfect in the way we desire our Christmas to be. It was all about giving for goodness, truth, love and peace.

In the same way that solidarity can flow from disaster, unity can come from Christmas. A large part of the world stops on the same day to spend time with loved ones, and many have their once-a-year Church experience. Locally, Christmas can be a time for unity and peace within the family, and within ourselves.

In the cold Christmas of 1914, an unofficial truce in the Western Front trenches of World War I allowed German and English soldiers to mingle on Christmas Day. They exchanged gifts between sides, respectfully buried their dead and played a famous game of football on neutral ground. An ultimate act of peace, where grievances and hatred were dropped for a day in the name of unity and the Christmas spirit.

Families can be messy and complicated, and Christmas often highlights the worst of it. May we make the effort to drop our grievances and call a truce in the name of unity. Whether including the difficult relative or forgiving a past hurt, let go of prejudice and allow unity to flow from the chaos this Christmas.