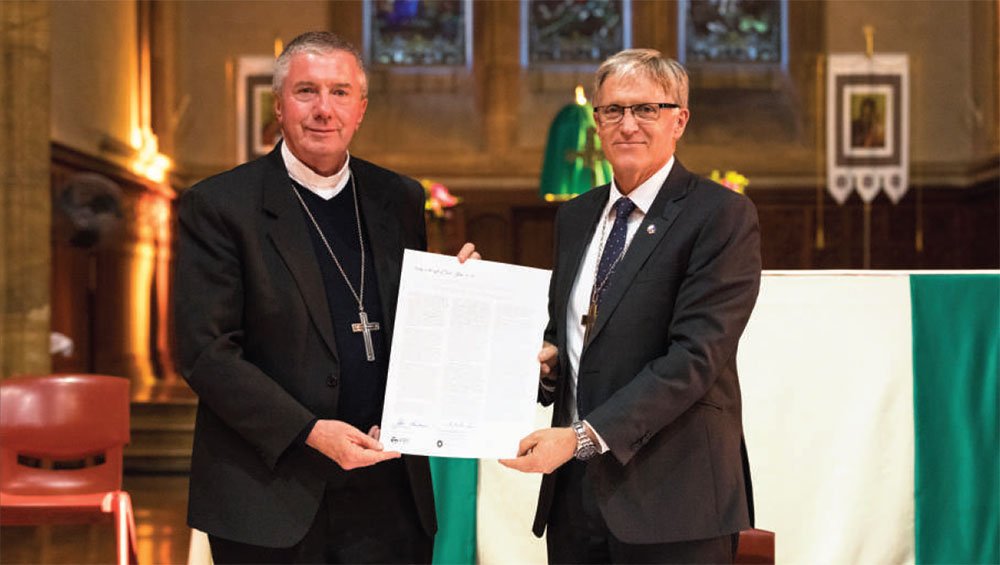 A NATIONAL commemoration of the 500th anniversary of the Reformation on Tuesday October 31 has been described as an “ecumenical camino” by Archbishop Christopher Prowse.

Hundreds of Catholics and Lutherans took part in the day-long program of events marking the posting of Martin Luther’s 95 theses in Wittenberg on October 31 1517.

Archbishop Prowse, who is chairman of the Bishops Commission for Ecumenism and Inter-religious Relations, said the commemoration of the Lutheran Reformation was historic at a national and international level.

“It was wonderfully planned and beautifully brought together – I consider it to be an ecumenical camino,” Archbishop Prowse said after he and Bishop John Henderson of the Lutheran Church of Australia signed a declaration of unity between the two churches.

“It’s been a journey not just today but also in terms of the future and the gratitude we have for all that has taken place to get to this point.

“There is also a deep sense of repentance and regret for the terrible ways we treated each other in the past.”

Referring to the impact of Vatican II and the Joint Declaration on Justification in 1999, Archbishop Prowse said it was almost as if an “impulse of the Holy Spirit” had taken over in the past five decades and a great deal had been achieved in a relatively short time.

In a presentation on the Lutheran-Roman Catholic Dialogue prior to the signing of the declaration, Rev Dr Dean Zweck, Emeritus co-chair of the Dialogue, echoed the Archbishop’s sentiments.

“50 years ago, who would have thought Lutherans and Catholics would sit together in St Francis Xavier’s Cathedral to celebrate the 500th anniversary of the Reformation,” he said.

“Surely this is the work of Jesus Christ in our midst.”

Dr Gerard Kelly, president of the Catholic Institute of Sydney, said while there was “no timeframe” for the two Churches coming together in full fellowship, the important thing was that “we take steps”.

“I don’t quite know what it (full fellowship) would be like, there are all sorts of different views and we need to talk about that in our dialogue,” he said.

Participants processed to St Francis Xavier’s Cathedral for another packed session, this time on Reformation history, and then to the Adelaide Town Hall where Caritas Australia and Australian Lutheran World Service talked about how the two agencies worked side-by-side in providing humanitarian aid.

An ecumenical lunch was held in Victoria Square and Archbishop Philip Wilson and Bishop Henderson planted a tree in Pilgrim Peace Park to mark the occasion.

The afternoon program included a screening of the Luther Movie and a choral performance and organ recital in St Francis Xavier’s Cathedral.

The evening prayer service was modelled on the service attended in Lund, Sweden, by Pope Francis in October last year.

The day concluded with a reception and dinner in the Judith Redden Centre, St Aloysius College.

Archbishop Wilson said the day was an opportunity to “rejoice in our common faith in the love of God in Jesus Christ through the Holy Spirit”.

“It is my sincerest hope that our communities will continue on the path of transformation in God’s love, and find our way even closer to one another.”

– This story was first published by The Southern Cross.