THE site of the new Manuka precinct has been transformed over the past few months, with the underground section complete and the base of the building nearing completion.

Archdiocesan financial administrator Helen Delahunty said the majority of work being done relates to the main administration building (the Thomas Cahill Centre), although some work has also been done on the 44 independent living units.

The transfer of services has also now been completed, meaning that parking on Franklin Street for those visiting St Christopher’s Cathedral has returned to normal. 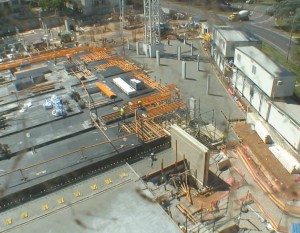 An aerial view of the Manuka precinct site. PHOTO: SUPPLIED

Ms Delahunty said the builders would take a short break over Christmas and New Year, but would be back on the job in the middle of January.

“I’m very happy with the progress we’ve made,” she said.

“There were some challenges at the start of the project, particularly regarding the soil and the ground… but it’s all been managed very well.”

It is expected that the precast concrete for the outside of the new building will be put in place in the coming months, meaning that the site will rapidly change, visually.

“Instead of building it brick by brick, the precast concrete is set in a factory and it will be delivered to the site as large lumps of concrete which will just be put up on the site,” Ms Delahunty said.

The project remains on track to be completed in April 2017.