So many special moments in the Holy Land 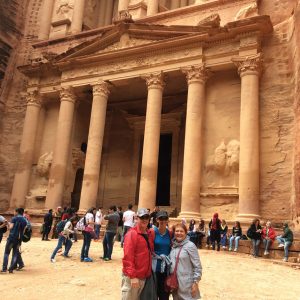 Margie Doyle tells of her experience as one of 37 pilgrims to the Holy Land from Mary Help of Christians Parish, South Woden, led by Fr Richard Thompson.

What was the highlight? Almost impossible to answer. Shortly after arriving in Jordan, we visited a group of Syrian refugees adopted by a parish.

It was a humbling experience to meet these lovely people who had to leave their homeland virtually in what they stood up in. They were so welcoming and shared lunch with us.

Petra was absolutely magnificent; the sheer majestic grandeur of the rock formation and caves where the Bedouins lived until 1985, buildings going back thousands of years.

The Gospels now take on a new meaning and have come to life, especially in the Garden of Gethsemane. We perhaps walked where Jesus walked – the Via Delarosa Stations of the Cross on the way to his Crucifixion. We visited and prayed where he was born, grew up, died and rose again.

There were many special moments, including Mass in the open-air beside the Jordan River where John the Baptist baptised Jesus, and on Mount Nebo, where Moses was shown the Promised Land. There was Mass at the tomb in the Church of the Holy Sepulchre, in a cave in the Shepherds Field and in the beautiful Church of the Annunciation where Mary visited her cousin Elizabeth.

After hearing Bible stories as a little girl in Sunday School, for me it has been a dream come true and a journey of a lifetime, one I will always treasure.