Marriage on the agenda 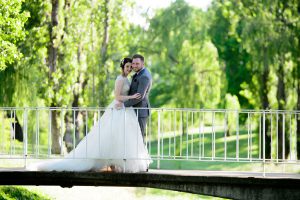 “PERHAPS now more than at any time in our history we need a renaissance, a rediscovery united in the goal of advancing our understanding of Catholic marriage.”

Armidale Bishop Michael Kennedy, who heads the Australian Catholic Marriage and Family Council, made this comment after the inaugural Renaissance of Marriage Conference in Sydney late last year.

Three bishops as well as many clergy, religious and laity gathered for the conference (www.rom.org.au), which was run as a collaborative effort between the Marriage Resource Centre in Sydney and the Australian Catholic Marriage and Family Council.

The council is the conduit through which lay-led Catholic marriage education organisations in Australia relate formally to the Australian Catholic Bishops Conference.

Bishop Kennedy believed the event was a timely one.

International speakers included Theology of the Body expert Christopher West and David Lejeune, the French CEO of OPUSfidelis, a strategic communication and social media agency which has been assisting the Vatican in establishing the Foundation for Evangelisation Through the Media (https://femus.org/)

Archbishop Mark Coleridge, Archbishop Anthony Fisher and Bishop Peter Comensoli, as well as Lara Kirk and Jonathan and Karen Doyle from the Archdiocese, spoke at the conference.

One young couple who gave public witness to their love when they married in December last year is Canberra’s Joshua and Louise Osborne-Goldsbrough.

At last year’s Central Deanery Assembly they were invited on a panel to share their story.

They discussed a number of aspects about modern courtship, including the trend, which they did not follow, of many people cohabitating before getting married.

Catholic Schools Youth Mission Australia national director Huw Warmenhoven and his fiancée Chloe Kelly, are taking a similar path to the altar and will tie the knot at Mary Help of Christians, South Woden, on February 11.

Apart from the witness of their own parents, the couples could also take inspiration from the example of David and Valerie Patterson, of Young.

Last year at the Western Deanery Assembly, which focused on marriage and family life, the Pattersons along with Michael and Bernadette Mullany, also of Young, and Jack and Meg Grant were celebrating respectively their 50th, 60th and 67th wedding anniversaries.

When brought out in front of the assembly and asked by Archbishop Christopher Prowse to reveal the secret of marriage, Mr Patterson responded simply by saying: “we not me, ours not mine”.

Archbishop Prowse spoke about the need to be vulnerable with others, for intimacy sake.

It is a theme which is shared by CS Lewis who writes in The Four Loves, “to love at all is to be vulnerable”.

Marriage preparation in the Archdiocese

The Archbishop’s Office for Evangelisation has teamed with CatholicCare to help create an enhanced marriage preparation program for engaged couples.

The program will be available to engaged couples from Tuesday, February 7, and will run from 5pm to 9pm on the first Tuesday of each month.

The program builds on the FOCCUS Inventory which has been provided by CatholicCare for many years.

It allows a couple to individually read and consider a series of statements about relationship issues and mark a response that most appropriately reflects what they each think and feel about those issues.

After assessing each person’s responses, a trained CatholicCare facilitator meets privately with the couple to run through the inventory, identifying the strengths the couple can build on and highlighting issues that may require further discussion.

In feedback on the program, one young couple commented that, “the opportunity for open conversation in a safe and respectful, non-judgmental environment was brilliant”.

Once each couple has filled out the inventory, the program brings them together over a light meal to meet other engaged couples as well as long-time married couples who support the program.

After the meal, a priest from the Archdiocese will provide input on the theology of the marriage and a volunteer couple will witness to the blessings and challenges of married life.

Couples will also be given access to the Smart Loving Engaged Online resource which can be used in conjunction with the priest or a married couple from their parish to provide ongoing formation.

Vicar General Fr Tony Percy believes the added focus in marriage preparation is a good initiative in the Archdiocese.

“The importance of marriage preparation has again been highlighted by Pope Francis and, indeed, by our recent Archdiocesan gatherings devoted to marriage and family life,” he said.

“CatholicCare and the Archbishop’s Office for Evangelisation have responded to this need and teamed up to ensure solid and relevant marriage formation for couples wishing to enter the sacrament of matrimony.”

Anne Kirwan, the CEO of CatholicCare in the Archdiocese, is equally supportive.

“We have found that marriage preparation is a wonderful way to affirm a couple’s relationship and supports the formation of positive and strong relationships into the future,” she said.

Couples wanting to book into the course, should contact on CatholicCare (02) 6162 6100. Registration is essential.

Priests and marriage educators wanting to learn more about the program should contact Lara Kirk, Marriage Family and Relationships Coordinator with the Archbishop’s Office for Evangelisation.

CatholicCare marriage preparation PROGRAM DATES (The program runs from 5-9pm on the first Tuesday of every month at the CatholicCare offices at 57 Hicks Street, Red Hill ACT.