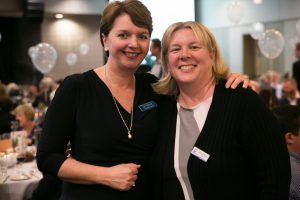 The occasion provided supporters with a chance to reflect on the journey which began in 1960 when the Franciscan Missionaries of Mary came to Canberra at the invitation of Archbishop Eris O’Brien.

The Archdiocese took responsibility for Marymead from July 1986, following its 26 years under the care of the Sisters.

Over 50 years, the organisation has provided family support and therapeutic services to children, young people and their families in the ACT and surrounding regions.

“Initially the Sisters worked with a couple of Catholic Girls schools, but soon realised that Canberra was in a period of rapid growth and set about liaising with the community and government about the needs of the community,” she said.

“As a result the needs of children and families in temporary crisis was identified as a priority and Marymead came to be.”

She spoke about how far Marymead had come in a short time, and that it was just as relevant now as 50 years ago.

“Today Marymead sees over 7000 people each year in the ACT and the surrounding NSW region [and] our services currently extend as far west as families in Griffith, as far south as the New South Wales and Victoria border, and as far north as Young and Goulburn.”

She discussed the organisation’s strong reputation over many years and what the immediate future held.

“Our next greatest challenge is the redevelopment of the 7ha site in Narrabundah, which will take place from August over the next two years,” she said.

Marymead is establishing contemporary purpose-built facilities including a large community and service delivery centre, as well as multi-functional houses.

“[It is] to ensure our sustainability into the future”, she said.

“The remaining site will be dedicated to a retirement village, which will generate additional income for Marymead.”

Mrs Rowland paid tribute to the Franciscan Missionaries of Mary Sisters for their service and foresight.

She praised Marymead patron Lady Helen Deane for her “unswerving support” and for being “such a wonderful role model”.

She thanked the board and management of the Canberra Southern Cross Club for its long-time support, and praised the working relationship with the local Winnunga Nimmityjah Aboriginal Health Service.

She acknowledged the Marymead Board and her own staff and introduced the latest fundraising initiative Building Futures Fund, which will help ensure long-term financial viability.

Earlier in the day, Archbishop Christopher Prowse spoke about Marymead as a “Canberra icon”.

He explained a parallel between the organisation and St Aloysius Gonzaga (1568 to 1591), whose memorial was being celebrated during the Golden Jubilee Mass.

“He (St Aloysius) died very young, [and he] lived a two-dimensional Christianity in a saintly way,” Archbishop Prowse said in his homily.

“On the vertical level he was deeply spiritual, and on the horizontal level he was immensely pastoral and practical to those that came to him in any need.”

Archbishop Prowse said Marymead’s foundation was also two-dimensional and is an expression of prayer from its earliest of days.

“I think the two-dimensional foundation of Marymead can be seen first of all in its name which is the amalgamation of two words,” he said.

“Mary refers to Mary (the Mother of God) and mead is an old English name meaning meadow, [which] conjures up an image of cool and fresh pastures.

“Maybe this is why the Sisters, when they arrived in the early 1960’s, chose an 11-acre paddock in Narrabundah to begin their ministry.”

He thanked Mrs Rowland and Margaret Carmody for their work as CEO and Chair of the Board and called on the congregation and wider community to pray the future of Marymead, as well as for its benefactors.